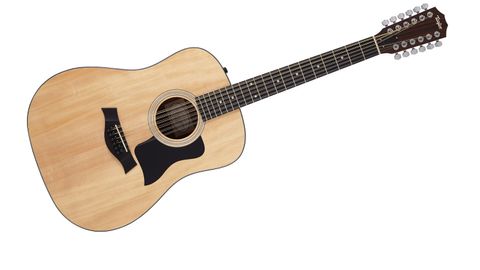 High value for such a premium brand, this is a serious electro 12-string that focuses on sound and playability.

The 100 series is the entry point to full-size Taylor instruments, and like the firm's popular 200 series, all guitars are Mexican-made with a choice of just dreadnought and grand auditorium body sizes.

It's a trim range of four models, that was augmented at this year's Frankfurt Musikmesse with a fifth: a 12-string non-cutaway dreadnought that is unique - all Taylor's other 12-strings use the grand symphony body shape.

Devoid of any deluxe status, the 150e looks a little blue-collar, but with a return to traditionalism for many current bands and players that's maybe no bad thing. Nor is the price: half that of the 356ce.

The 150e's elongated headstock changes the balance point from your usual acoustic and the bigger neck is initially quite a handful with a wider nut, although in terms of depth - 21.3mm at the 1st fret, 22.5mm at the 10th - it is identical to the six-string.

There's a very expansive voice to this guitar, the upper jangle suiting the dreadnought's fuller, 'dirtier' low end. This is quite a rootsy-sounding instrument: less piano-like than the grand symphony 12-strings? It certainly sounds it.

Taylor's Expression System has its fans and detractors, but running through our LR Baggs Venue DI into a Line 6 Stage Source it's a pretty natural reflection of the guitar's acoustic performance, certainly in lower positions.

The treble EQ on the 214 can add modern zing or, when reduced, a darker, more magnetic soundhole-pickup type of sound. It's the same deal with the 150e, which suits that slightly magnetic tonality of the Expression System as you move up the fingerboard.

Taylor's grand auditorium is the definition of the modern electro steel-string, and this deluxe version is well aimed. With its upgraded pickup system, all-gloss exotic wood body and a hard case, while you can't call a four-figure sum a 'steal', in reality it is. It's superb.

Likewise, the more blue-collar 150e. It certainly isn't the most affordable 12-string electro on the market, or the prettiest, but with its faultless build quality, stellar playability and intonation, and excellent sound - not to mention a sturdy 'hard' gigbag - it's almost a no-brainer for the pro-minded gigging and recording musician.