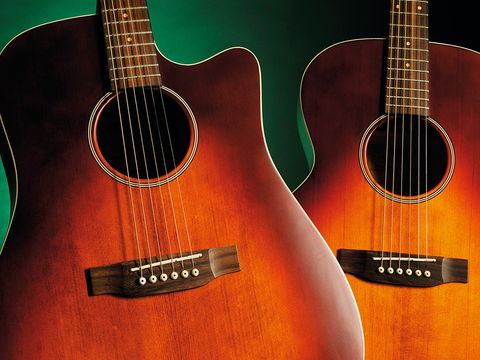 A strong contender in this fierce market.

Given the sheer abundance of boutique instruments that debut each year, it's rare for the eye to be drawn by a mid-price acoustic. Takamine's new G-Series EG5303SC proved a notable exception in 2007, sparking interest with its natural post-war finish, and maintaining it with its lively raw materials and features.

Not all Takamines are created equal. Underneath the top-dollar treasures in the Japanese-built range, there's a strict hierarchy between the mid-price G-Series models made in Korea and the more rudimentary, entry-level G acoustics that leave the Chinese factory. The latter are priced as low as £129, so it follows that around three times that - £399 for the Korean EG5303SC - buys you a vastly superior guitar.

Nothing in the existing G-Series is styled quite like the EG5303SC. We're told that Takamine's guiding principle was to evoke the dreadnoughts of the fifties rock 'n' roll boom.

They've certainly succeeded on a cosmetic level, with the natural satin 'violin' finish bringing a vintage vibe to the solid spruce top and laminated 'fiddle back' maple body, the nickel tuners and ivory pegs looking the part, and white binding tracing the square-shoulder format to great effect.

Of course, the 'base' of the model is the stock Takamine dread shape - exactly as you'd expect for £399.

Alongside the spruce and maple, a further two woods feature in the form of a nato neck and rosewood 'board, but that's not to say the EG5303SC feels thrown together.

On the contrary, it's one of the tidiest examples we've seen in this bracket: the fretwire is finished to Takamine's usual standard, all edges are smooth and joins solid, and the X bracing pattern promises both resilience and resonance.

Just as vital to this model's gigging credentials, meanwhile, is the inclusion of a piezo under-saddle pickup controlled by the TK-40 preamp - a no-nonsense, notch filter - equipped unit which has impressed Guitarist in the past.

Takamine necks enjoy a good reputation for the versatility of their 'modified C' profile - doubtless that's why this bruiser of a model still feels manageable and enables expressive, zippy play.

The gentle camber of the 'board makes fingerstyle feasible and comfortable, but we find the EG5303SC's forté is when you dig in and work through flat-picked passages. It responds confidently in terms of dynamics, without too much flap or fluster.

Takamine has never claimed the EG5303SC would sound 'vintage', and while the flavour of the fifties is inevitably diluted when you pick it up, this model does supply a traditional dreadnought voice that should delight fans of old-school boom while delivering on their modern demands.

Raw, there's good volume from that deep body, and tonally the low end is surprising for a laminated maple box; the bass response shakes through your lap when you pluck a low E. Strummed chords hang warm in the air rather than evaporating in a thin shimmer, and a pleasant buttery edge is apparent in the solos you peel off at the cutaway.

Through a decent acoustic amp the TK-40 conveys all that without colouring it too much, though some element of undersaddle rasp is necessarily present. Breaking into the Japanese range would bring more tonal character both acoustically and plugged in, but this is still a commendable performance.

Cynics will suggest the EG5303SC is little more than a standard Takamine given a fancy - or indeed un-fancy looking - finish. But what's wrong with making mid-price acoustics look interesting? It's hardly a crime - especially when scratching the surface reveals good materials and admirable production values that translate into

This guitar isn't aimed at true vintage fans - the visual vibe is only skin-deep - but for budget-conscious players who want to take the looks of yore on to the modern gig circuit, it's fair to say that this guitar delivers in spades.