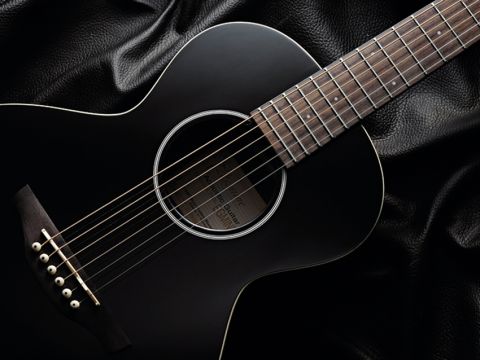 As a travel guitar or a starter guitar for your youngsters, the Takamine EG Mini is just fine and reasonably affordable. If you don't expect more than that, you'll be happy.

Is the mini body style becoming the latest hot thing in the acoustic guitar world? We've previously looked at Taylor's GS Mini, which was launched in the USA in the last quarter of 2010.

Then, at 2011's Winter NAMM show in January Takamine announced its answer- or perhaps simply a coincidental launch- the G Series Mini. Supplied in a standard gigbag - a lot less robust than the 'hard' gigbag the Taylor GS Mini came with - our 'Takamini' arrived in a cool-looking, gloss black livery with single strip cream edge binding.

The Takamine's back is conventionally braced, while the Taylor has a more bulbous and unbraced back. The blackstained bridge here has an intonated saddle and blackdotted cream plastic pins; the tuners are perfectly serviceable Takamine-logo'd enclosed types and you can access the truss rod access via the 90.6mm diameter soundhole.

Like the GS Mini it's a 14-fret guitar- the fretboard is very tidy, edge-bound with a black plastic strip plus micro face dots, which according to the spec sheet should be abalone, but look like standard pearloid.

The neck profile is a good 'C'-shaped handful and the nut width is about half a millimetre narrower than the GS Mini and about a millimetre tighter at the12th fret.

These dimensional differences may seem small, but they have a profound effect on the feel and playability of the guitar: the Takamini has less air and space, especially at the nut- it feels more 'mini' than the Taylor.

The Takamini is available as a pure acoustic or, as reviewed here, with a built-in undersaddle pickup and passive gain and tone controls. The output is via the base strap pin/jack socket but, unlike the GS Mini, we don't get a second strap button on the heel.

The Mini hardly kicks out a big sound, but that's not the point. Initially the Takamini sounds a little thin, with a tight bass end and perhaps, as you'd expect, a rather boxy character- certainly after a full size dreadnought!

But play it for a while and not only do you get used to the narrow left-hand spacing but, tonally, it's more balanced than initial impressions indicate and is the ideal volume for indulging in a round-the-table strumalong.

The onboard passive system is typically low in output and on the bright, zingy side tonally. The tone control has a rather abrupt change from bright to dull and very little in between. But, if zingy and piezo is good for you, it works.

This travel guitar certainly has charm and an acceptable voice. Plugged in, the abrupt tone control lets it down, but we've heard worse.

Its narrow nut string spacing and shorter scale does make it less useful for any serious playing/practice than the Taylor GS Mini, but it is considerably cheaper and there's little doubt it'd be a fun companion on your summer hols, and good enough to plug in for that bar gig when you run out of money.