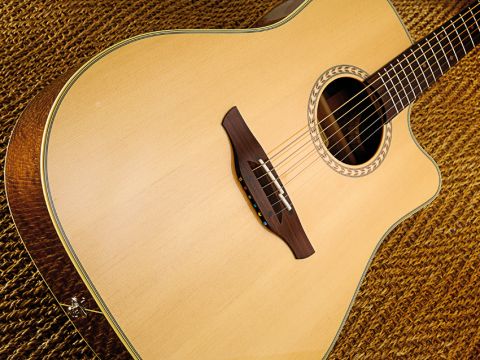 A more affordable limited edition offering a loud and lively output, it's also well suited to life on the road.

Takamine produces limited-edition models annually, each with its own specific theme, and has done so since 1987's fairly garish offering, the EF25.

The EF300W is Takamine's most recent LTD, though it doesn't form part of the regular annual series. With only 200 units being released throughout Europe, the EF300W will be fairly scarce, but comparatively, its price point doesn't reflect that.

"This more sought-after tonewood has greater texture and interest to its grain and, as such, will appeal to those who appreciate the nuances of tonewoods."

As its name suggests, the EF300W is a derivative of Takamine's EF300 series - the same range upon which Glenn Frey's signature model is based, so we're in good company here.

Offered with a branded hard shell case, its maker clearly expects the EF300W to be taken out on the road, a view further evidenced by the inclusion of Takamine's CT-4B preamp, featuring the award-winning Cool Tube technology.

The EF300W's clean, sweeping Venetian cutaway dreadnought lines are outlined with simple but tasteful coachlining and binding, while the guitar's top showcases a gorgeous selection of book-matched solid spruce.

Differentiating the EF300W from its base series, flamed black mahogany has been used for the sides and two-piece back. This more sought-after tonewood has greater texture and interest to its grain and, as such, will appeal to those who appreciate the nuances of tonewoods. Wood lovers will also appreciate the enlarged herringbone pattern inlays used to create a stylish soundhole rosette.

The two-piece mahogany neck is home to a rosewood fingerboard and a strap button fitted to the treble side of the neck stack. We also like the way the end of the fingerboard is shaped to perfectly marry the soundhole. Continuing the stylish-yet-simple theme, the fretboard incorporates understated inlaid mahogany dot markers.

In keeping with many of its stage-ready guitars, Takamine's rosewood string-through bridge design sits on the soundboard. Some would claim that not having the strings physically pass through the top (then secured with traditional pins) compromises the guitar's tone.

On one hand, similarly specced Takamines are in widespread professional use. On the other, Tak artists including Bruce Springsteen, Steve Wariner, John Jorgenson and Glenn Frey choose pinned bridges. Whatever your view, the design does facilitate super-speedy string changing.

Though a little bottom-heavy, the EF300W is a comfortable guitar to play, either standing or seated. The string spacing at the nut is identical to that of a D-18 and spot on for strumming duties.

In acoustic mode, the EF300W offers a lively, bright and snappy tone with lots of mid-range and projection. Push a little harder and it responds with a raspy chop.

A full-blown thrashing finds the guitar's limits, but overall the EF300W offers plenty of punch and reasonable sustain.

However, a softer right-hand technique exposes a relative lack of tonal depth and character. Compared back to back with dreadnought electros around the £1,000 mark, the EF300W is certainly among the loudest, though this seems to have been achieved at the expense of a some poise and sweetness. No doubt over time, though, the EF300W will loosen up and begin to mellow: all acoustics do.

Although the CT-4B has been around for a little while now, it's still an impressive system. Pushing out an admirable amount of volume, its sliders also offer a great degree of control over the output.

The default 'flat' sound needs warming up a little, but this is well within the range of the preamp system and the more time we spent experimenting, the more variations in tone we find.

We'd suggest that where the acoustic sound may lack a little warmth and depth, the onboard electronics make up for that in abundance.

It's hard not to like the EF300W; it's well built, stylish and easy on the eye. The acoustic tone is what it is - bright, snappy and full of life, if lacking a little soul. But for the most part, we'd expect the EF300W to be plugged in and that's where it excels.

If you're looking for a capable dreadnought for home recording, open-mic and band stage work, the EF300W could be just what the doctor ordered - if you're lucky enough to track down one of the 200, that is.