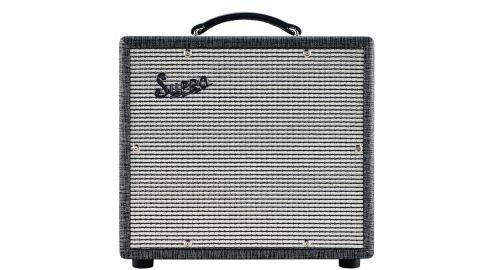 It may be a little on the pricey side, but we think you're getting your money's worth here.

Among those lost amplification brands returned from retirement in recent years, there's none more welcome than Supro.

Now under the wing of New York-based Absara Audio of Pigtronix pedals fame, Supro's roots go right back to the beginning  of the electric guitar's history, while its amps have been used on many highly influential recordings.

Supro pays a special tribute to its glory days with the Classic Series, which also includes the 1695T 'Black Magick' 1x12 combo and is now joined by the Supreme 1600 we have here, a tribute to the original Chicago-built amplifier reputedly used by The Rolling Stones for many of their studio recordings.

Our 1600 Supreme looks the part, with its period-correct styling and control panel. The cabinet is almost square and quite shallow front to back, making it easy to tuck away in even the smallest bedroom.

The retro vinyl work is top-notch. Like some other Supros, the original 1600 used a pair of 6973 output valves, which aren't so common on guitar amps but are well known to restorers of old jukeboxes. There was an 'Oahu'-branded 1600 that ran the superior and more commonly available 6V6, and it's a pair of these valves you'll find in the reissued version. The modern 6V6 is very reliable, more so than the current batch of 6973s, which is a good thing all round, because the 1600's design means you can't easily access the valves for quick replacement - the whole chassis has to come out.

Underneath the control panel, the modern 1600's electronics are all printed circuit, using one large very high-quality board  for everything, including the front panel controls. Top-quality components include Wima 'pink brick' capacitors and metal film resistors throughout, for low noise and long- term reliability. The board layout, wiring and soldering are excellent, which all adds up to an amp that's built to take the knocks of real-world touring while continuing to perform night after night.

There's no effects loop, channel switching  or any other feature that might be loosely construed as 'modern' - the 1600's vintage appeal comes from its simple, straightforward controls and quirky preamplifier design, which go a long way towards defining the kind of sounds it makes.

The 1600 Supreme may be small but its tones are anything but, thanks to the pair of cathode-biased 6V6 output valves, a generously sized output transformer and a very powerful 10-inch custom-designed loudspeaker with a disproportionately punchy bass response. At lower volume levels, plugged into input 2, you can roll off the top-end and get a superb earthy jazz tone, which sounds great with our Ibanez archtop, especially as there's practically zero hum and hiss.

Adding treble and swapping to a Tele yields some excellent country twang, with just a hint of growl as you dig in. Turn  up the volumes even more, plug into both channels and swap to humbuckers, and the 1600 becomes a very capable and loud blues/rock amp, with plenty of harmonic overtones and easily controlled feedback when you stand close to the speaker. If you play your guitar in Keef tuning, you'll find all those classic Stones riffs sound astoundingly authentic, with a strong USA influence.

The 1600 Supreme's low-ish front end gain and superb low noise performance also make an excellent platform for pedals, where it can sound as modern or vintage as you like, depending on what stompboxes you hook up. Slide players take note - a good compressor and overdrive will give you some truly great sounds that sit firmly in Sonny Landreth territory.

Overall, the 1600 Supreme is a worthy addition to Supro's reborn modern catalogue: it's built to a very high standard and blends vintage looks and tones with modern reliability.

It's going to be particularly attractive  to blues, classic rock and country players, with the obvious inclusion of Rolling Stones/Keith Richards fans. Meanwhile, slide players and pedal users looking for  a compact low-noise platform should  also look this one up. It's small and very portable but no lightweight thanks to heavy-duty transformers and that amazing loudspeaker, and the excellent low noise performance makes for a very versatile studio partner.