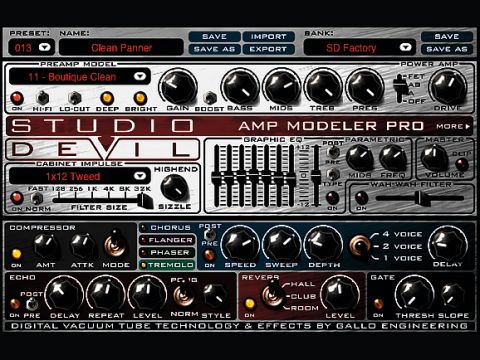 AMP focuses on the basics rather than esoteric features, and what's more, it's got the tone to make this approach work.

Currently the software is in VST and AU formats (it doesn't run standalone), with RTAS support in the pipeline.

Studio Devil is keen to point out that Amp Modeller Pro uses its own patented modelling technology to replicate the behaviour of hardware preamp valves. There are tone controls (bass, mid, treble and presence) and a modelled power amp stage (Tube Class A, Class AB and FET). Aiding sound quality are 64-bit processing and, with the Hi-Fi switch engaged, 192kHz internal upsampling.

Unusually for a modern amp plug-in, AMP has a single-page interface, and with the exception of its tuner (which appears in a pop-up window), all controls are crammed into quite a small window.

Our first impression of this was that it's a little crowded, but in its defence, you won't get lost hunting across multiple pages, and once you've learnt where everything is, it's quite immediate.

It's worth noting that AMP doesn't enable you to use multi-amp setups, and it doesn't feature variable mic positioning (although its cab options provide different mic positions), nor does it offer any 'tone' pedals (ie, overdrive, distortion, etc). However, you can assign MIDI CCs to all of its parameters (including the Wah-Wah Filter), and its cabinet impulse processor accepts third-party WAV and AIFF impulses. Indeed, the program's stock cabinet impulse library is bolstered by a demo set from ReCabinet to whet your appetite, and a further selection of bonus cabs.

AMP's controls are, for the most part, self-explanatory and the division of the GUI between the top half (amp, cabinet and EQ) and the bottom half (effects, compressor and gate) makes perfect sense. However, there are a few controls that merit particular mention.

First up, five of the effects (Chorus, Flanger, Phaser, Tremolo and Echo) and the EQ section can each be placed before the amp (stompbox-style) or after (like studio effects). This influences the sound considerably, and effects placed after the preamp become stereo, too.

The effects are all of good quality, and while they don't have zillions of controls, there's enough there for you to dial in a range of sounds. For instance, the Echo effect's Style control takes the sound from 'analogue' (low-pass filter) to 'tape' (band-pass) on through to digital delay (no filtering).

Amp Modeler Pro is the work of New York DSP engineer Marc Gallo, who's made it his personal mission to produce CPU-efficient models of real-world valve circuits. Gallo reckons that his work has resulted in a plug-in that captures the non-linear behaviour of both the frequency and dynamics of hardware guitar preamps, and we're inclined to agree with him.

Gallo's f­irst port of call was to model that preamp mainstay, the 12AX7A (or ECC83) valve - from there, he was then able to con­figure full preamp stages from the schematics of the original amps.

"Amp Modeler Pro is the work of New York DSP engineer Marc Gallo, who's made it his personal mission to produce CPU-efficient models of real-world valve circuits."

He later turned his attention to emulating the behaviour of three power amp stages: Class A, Class AB and FET. The former two are valve-based and have more of a squashy, bouncy character. FET amps use transistors, and while they don't sound as lively as valves, they're generally a better bet for solidity and consistency.

Turning up the power amp Drive knob is like cranking up a real amp, with the sound gradually becoming thicker and more saturated. Just like with real amps, putting everything 'on ten' doesn't necessarily give you the most powerful sound, so be sure to play around with the preamp and power amp Gain/Drive controls until you hit that elusive sweet spot.

The first thing to say about AMP's tone is that the amps modelled cover plenty of ground, from American Clean (based on a Fender Twin) to Rectified Crunch (modelled on a Mesa/Boogie Dual Rectifier), with plenty in between. Furthermore, once you get tweaking, even the basic preamp controls have considerable impact.

The three-position Low Cut switch is great for thinning out a thick Les Paul sound, whereas the Deep option kicks in extra bass that can beef up a thin Strat. There's a Bright switch, too, which we preferred to leave on most of the time, and a Boost switch for further grit. And all of this before you've used the main tone knobs.

Among the 15 amp models, we found more of an emphasis on driven sounds, and AMP is definitely one of the best plug-ins we've tried for crunch-tastic high-gain sounds. We were impressed with the hi-fi option, too, which takes the fizziness out of driven sounds, although there is a CPU hit for the privilege. However, the clean options, particularly the Boutique Clean (based on a Matchless Chieftain) sound great, especially when combined with the effects.

Then there's AMP's cabinet impulse processor. This looks less impressive than the graphical 'mic plus cabinet' options that are offered by some plug-ins (although many of them use the same technology under the hood). However, with 100 or so impulses included, there's an enormous amount of variety here, and you can always add more third-party impulses.

Just flicking through the supplied cabs can dramatically alter the sound, although it's a shame that you have to do this via a fiddly dropdown menu - buttons to page through the cabs (and preamps) would be nice. Furthermore, you can't sync effects to host BPM and there are no parameter readouts for any of AMP's knobs. It also seems that if you don't hit the Save button on the GUI, your patch will revert to its default state when you save and reload your project, which is pretty non-standard behaviour that Studio Devil needs to rectify as soon as possible.

Overall, AMP covers less ground than some of the competition, and if you need the ultimate in flexibility, it clearly isn't for you. Even so, you have to take the price into consideration, as well as the no-nonsense interface.

In use, we found playing and tweaking very easy, and the range of tones is impressive. We also understand that Studio Devil's modelling implementation enables it to easily add further models through standard updates, and you can always use third-party impulse responses to broaden your tonal palette.

Listen to the following in our Amp Modeler Pro audio demo: