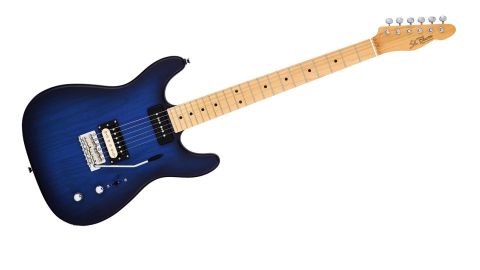 Lacks a little 'mojo' but is an excellent gigging tool with a great pickup combination.

If you're not familiar with St Blues, here's a potted history: after the US brand's heyday in the latter half of the 80s it disappeared until 2006, when it retuned with a small range of Korean-made instruments and a high-end USA Workshop Series line. In 2011, it was decided to make 'em only in Memphis, just like the old days. In January 2013, the affordable USA 'Juke Joint' line was created and in early in 2014 the Scoundrel joined the line-up.

While the current Workshop Series are more boutique-priced, with USA parts such as Lollar pickups, the Juke Joint model have satin finishes and non-USA pickups, with hardware from Kent Armstrong and Wilkinson.

With its uncontoured 'slab' body, there's something wonderfully uncultured about this design. It has a standard 45mm thick body and large-radius Strat-like edges.

The Scoundrel's symmetrical horns - like the treble half of a Strat, mirrored - give it, in upright position, an oddly unbalanced look. It has a seemingly standard Fender-like bolt-on neck join, too - the heel platform of the body is left angular, but the neck joint feels very rigid.

On closer inspection, you can see that the bottom two neck screws sit inside their usual corner placement; this is because the Scoundrel's neck is machined, so there's a small cutaway on each corner that sits into a nicely machined neck pocket that matches that shape and means there's no lip where the cutaway flows into the neck.

Similar class is applied to the neck, and it has that Fender Tele-inspired headstock with an open-hole, easy-to-tweak truss rod adjustment behind the nut and quite a deep but not overly-big rounded C profile that gets pleasantly chunky further up the neck.

Dimensionally, that equates to 23.8mm at the first fret and 24mm at the 12th. Fretting is very tidy, a medium wire with well rounded ends.

The satin finishing is done well on both body and neck. The Scoundrel's neck and body are contrasted: the natural maple against the Blue Suede is slightly bursted around its edges. No doubt the finish will burnish with use, but it does look a little 'entry-level' on this slab body.

The Scoundrel's Wilkinson-branded Fender knock-off bridge looks a bit cheap in terms of its finishing and plating, but features a push-in arm. There's also Wilkinson E-Z-Lok tuners, which means the guitar should not need a string tree.

Both volume and tone controls have pull/push switches to voice the individual coil-splits on the humbucker and the coil-tap of the P-90. All very logical.

The Scoundrel is definitely, but not totally, Strat-like. Its sounds are bright and fairly clean, though there's a family resemblance to the recently reviewed Juke Joint Mississippi Bluesmaster in the full and split modes of the bridge pickup.

The vibrato brings its own resonance, too - slightly less forceful perhaps? - but the lack of a string tree means the open E and B strings sound a little thin. The stiff vibrato set-up, which sits flat on the body, doesn't feel great either, but with a few minor tweaks there should be little to worry about here.

The neck P-90 is a nice twist with an attractive single-coil percussion that's cleaner and leaner than the Bluesmaster's 'bucker, and the coil-tap creates a lighter, spankier version: very usable, not least with the nicely graduated volume control, which tames the hot vintage- like bridge pickups or lets you slam the front end of your amp a little. No surprises, but good working sounds.

If you like your posh guitars, this St Blues isn't for you. It's simply a well made, well - but not exceptionally - priced USA instrument that will appeal to the working player in all of us.

The trouble is that with Fender, Gibson and PRS producing USA-made instruments at similar or lower retail prices with gloss finishes and more upmarket features (some with hard cases, not to mention auto-tuners!), they do look a little over-priced and under-spec'd.

St Blues was always about doing something different, and as we always say, the 'best' guitar is the one that suits you. If you're looking for a workhorse that you might want to mod and gig to death, don't ignore this guitar.