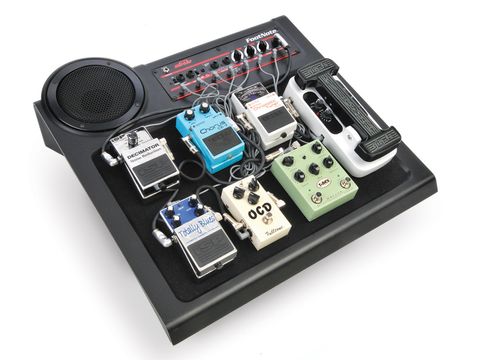 A hybrid that doesn't quite come off.

SKB made its name by producing moulded polymer flight cases, but now it's releasing what it claims is the world's first amplified pedalboard.

Onboard is a five-watt amplifier with a simple Treble, Bass and Level control layout, which then pumps its sound through a six-inch Eminence speaker. It's also able to power up to eight stompboxes, plus there's a built-in cable tester, auxiliary output and headphone socket. The amp part can drive an external speaker cab too.

Setting up your 'board is pretty standard, with pedals attached using the included velcro. SKB has also supplied power cables for your pedals, which are in turn connected to any of the eight power sockets at the 'board's top.

As a pedalboard, the FootNote is great. There's plenty of space, and supplying power to pedals is convenient. The cable tester is a neat add-on for checking your leads too.

Unfortunately, we're not convinced by the rest of it. The amp and speaker are useable, but keeping things clean at anything past the quarter volume mark is tricky.

The panel is busy too, and the labelling isn't entirely clear. With those power sockets pushing electricity through a mini-jack socket, a hastily plugged in MP3 player could take a 9-volt hit. It's bulky, and there's no SKB solution for housing a FootNote in on the way to gigs either.

Ultimately, it feels like an answer to a problem that doesn't really exist.