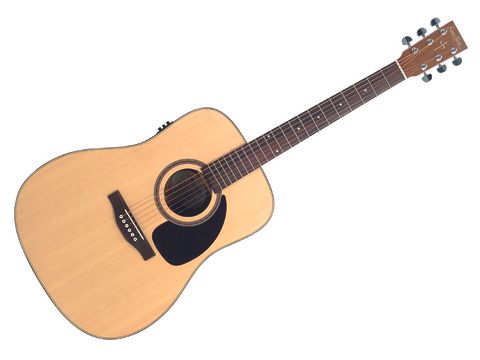 Plainish looks but a versatile powerhouse when fired up.

The body, carrying a nicely even, hand-polished semi-gloss finish, is bound in dark brown plastic with cream top purfling, and there's a back centre strip of light/dark woods. The rosette's wood-marquetry inlay is attractive, and the peghead overlay is a twin veneer of mahogany and maple, bevelled to reveal maple edging.

With a shorter 632mm scale, the satin neck isn't grain filled but it's reasonably smooth, and the 44mm nut span and moderate-depth 'C' profile offers an accessible handful. Bridge string spacing is only just shy of 55mm, so picking is catered for.

Given their mutual spruce/mahogany build, the Pro's inherent acoustic timbre isn't so dissimilar to that of the Tanglewood TW15H-E, though the lows aren't as deep and the delivery is lighter. It's
a balanced, easy-sustaining sound, and the open voicing helps reveal a sweetly sparkling top end.

The gainful A3T preamp proves thoroughly rewarding: there's huge tonal scope from the four bands, and while things can be overcooked, especially treble and presence, the permutations are so flexible the palette of sounds can tackle pretty much any electro genre.