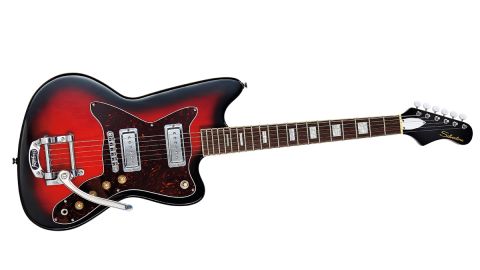 Just like back in the 50s and 60s, the 1423 and 1478 are there to give beginners, or anyone else on a tight budget, a leg up, offering them a choice beyond the usual package deals and copies.

Back in the 1950s and 60s, American kids itching for a cool electric guitar had a couple of options: bug mom and pop for a DuPont-dipped sex machine from Fender, or get real and start flicking through the Sears Roebuck & Company catalogue (or that of Montgomery Ward, original source of White Stripe Jack White's beloved Airline 'JB Hutto' model).

Department store behemoth Sears had long branded Silvertone on a range of radios and record players before the script found its way onto headstocks of guitars sourced from Danelectro in New Jersey and Harmony in Chicago in the 1950s.

Added to the Sears catalogue in '63, the 1478 model was a lower spec edition of the then top-of-the-line Harmony H19 Silhouette, a Fender Jaguar-influenced beast with two offset DeArmond moustache pickups and a Hagström vibrato and bridge. The 1478 featured a more basic vibrato, a floating wood bridge, with zero intonation adjustment, and a couple of DeArmond diamond-grille pickups.

The reissue of the Silvertone 1478 you see before you offers the pawnshop prize aesthetics and boring four-digit model names of the original catalogue stars with concessions made to modern playability.

Now, you get a four-bolt neck/ body connection for more stability. For the record, the originals had three big screws, arranged in a triangular formation. In another welcome break from quirky 60s specification, the reissues feature anchored Tone-O-Matic bridges with intonation adjustment and, in the case of the Licensed Bigsby-equipped 1478, roller saddles.

The 1478 runs a mahogany core capped front and back with maple. So far, all good, then. In fact, the only gripe we have is the size of the control knobs. They're small, if perfectly formed, and take a bit of getting used to. To be fair, they are period-correct and look right for the proportions of the guitars...

The fretwork is to a decent standard, with the action set at a good height and no joy-killing buzzes or chokes to get upset about.

The 1487 replaces its original DeArmond pickups, in this instance with a pair of in-house single-coil units wired via two volumes, two tones and a three-way pickup selector toggle switch. Dial in some splashy reverb and this guitar hangs a perfect 10 for surf stuff.

When you're tired of getting your feet wet, add some crunch for a spiky punk tone or flick to
the middle position to add some warmth. The combination of both pickups, a gentler reverb, a touch of chorus, and a little wiggle of the Bigsby's handle turns up a handsome Smiths-era Johnny Marr tone.

This reboot probably won't thrill the vintage nitpickers but that's not their demographic. Sure, old-world charm has been sacrificed in places (timber, pickups, bridges) for modern practicalities, but that approach, along with the affordable price tag, gives this guitar a much wider appeal.