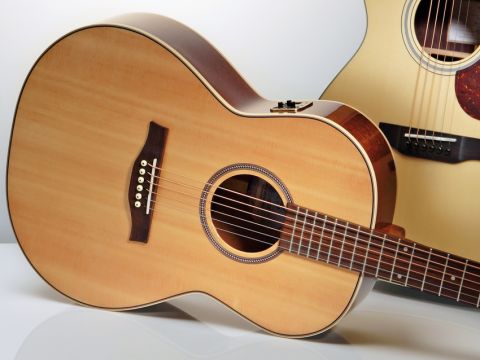 A nice folk picker with no pretensions.

The trouble is that the trusty budget box you started out on no longer cuts the mustard, and you're ready to splash out on a much better-quality guitar - almost certainly an electro - and are budgeting around £1,000, or even a bit more.

The most obvious candidates might be, say, a dreadnought or grand auditorium, but at the same time you're rather drawn to the idea of a mid-size instrument.

You'd be right to be so. OMs and 000s - so-called 'folks' - can be excellent all-rounders. They're more comfortable to handle, without necessarily sacrificing much in the way of unplugged performance, and are often easier to gig, tending to be less prone to feedback.

There's also the inkling that a cutaway may adversely affect acoustic sound quality, which it can. What are the non-cut options, then? Well, the choice isn't exactly huge, but this - from a major, well-respected name - could be just the ticket.

The Seagull's Godin Quantum I is fairly simple preamp, but includes a system-muting auto-chromatic tuner. Timber-wise, the Seagull is all-solid wood, and has a gloss body and satin neck.

The Seagull's body is based on classical lines, with a generally rounded profile. Its back and sides are mahogany, and the trim is simple but neatly executed, including cream binding with brown/ cream purfling around the spruce top, plus a herringbone rosette and back centre strip.

The tapered peghead is edged in maple, and on the bridge, slots are cut behind the saddle to help ensure a good string break angle regardless of the action height.

At 46mm across the nut, the three-piece, short-scale mahogany neck is fairly wide, which - coupled with a medium-depth 'C' profile - means a traditional, reasonably full grip. It's still a comfortable fingerstyle-friendly handful, though, and fretting along the unbound 'board is well dressed.

Although not particularly rich in the low end, the guitar nevertheless has a pleasing, brightish acoustic timbre, with a touch of woody airiness in the sustain and decent overall dynamics.

Powered up, the Quantum system delivers a convincingly natural voicing, although bass EQ needs to be restrained. When increased, it usefully adds a lot of volume to what is otherwise a fairly low-gain system, but the sound becomes progressively and undesirably boomier, so be prepared to establish the required low-end contribution before setting your final backline level.

The range of the treble band, meanwhile, is well tempered and flexible.

This guitar falls firmly within the classic Martin OM/000 genre. With its wide neck, the Seagull will attract fingerstyle fans thanks to its vintage-like.

The mahogany-backed Seagull isn't as richly voiced as we might like, yet it has an airy acoustic delivery and a good, if not too muscular, powered capability despite its quirky bass-band feature.

Build quality and value? We've no big complaints about the former: workmanship is impressively tidy. As for value, the Seagull's gigbag is fair enough. An extremely well-delivered instrument.