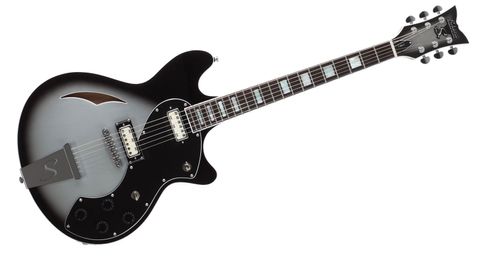 One of the best affordable retro-style guitars available. Looks, tones, playability - it's the whole package.

The TSH-1 model name has been around since 2000. Back in the day it had a mahogany body, bolt-on maple neck, bridge humbucker and a P-90 in the neck position.

In 2005, the model was relaunched as a Danelectro impersonator, available in six- and 12-string guises with Duncan Designed Lipstick tube humbuckers.

Based around an upsized Tempest series body, the 2011 TSH-1 reboot comes across like a gene-splicing experiment between a Rickenbacker 330 and a Gibson ES-335.

The double-bound, semi-acoustic maple body shares some obvious DNA with the classic ES-335 profile; even if the treble side body horn has been radically tweaked.

The Rickenbacker contribution to the TSH-1 gene pool is the body's flat top and back, set maple neck, and the small 'cat's eye' soundhole. Alphabetising issues aside, the chrome 'S' cutout tailpiece adds to the Ricky vibe.

The TSH-1 has a fat neck that gives it a fifties Les Paul vibe. Playability is great with the action on our example being sweet and low, but without suffering from any buzzing.

Bending strings anywhere on the bound 'board is a pleasure thanks to the Gibson-like 628mm (24.75-inch) scale, 22 medium frets and the typically Schecter 356mm (14-inch) radius. That's the same radius as a Danelectro, incidentally.

The twin SuperRock pickups are overwound, ceramic magnet-loaded, mini-humbucking jobs. They look like a blend of vintage DeArmonds and the kind of pickups you saw on sixties Japanese guitars. Each pickup has a volume and tone control and there's a coil-split switch to flick between humbucking and single-coil modes.

The choice to pair the TSH-1's maple body with those spunky mini humbuckers has also paid off in spades, with the guitar offering you bags of jingle jangle.

Ballpark-wise, we're feeling Tom Petty, Mike Campbell and Johnny Marr on a budget. Then simply add an overdrive pedal with the bridge pickup engaged for some Jam-era Paul Weller crunch.

The TSH-1 is perfect for mods young and old who can't stretch to a Ricky 330. But if you stomp on some thick Germanium fuzz, the TSH-1 will also produce some great primal garage rock and blues tones. We don't find ourselves flicking the coil-split switch to the single-coil mode much, but it's there if you want super-jangle.