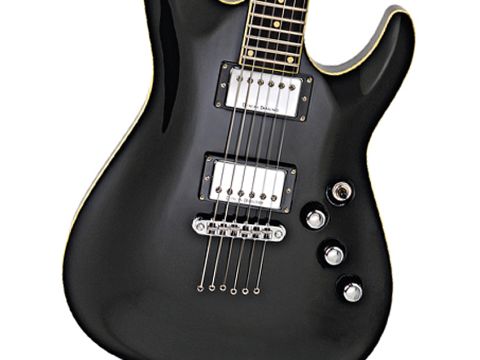 For your first quality electric, or as an addition to your arsenal, you'll be hard pushed to go wrong here.

Even a cursory glance at Schecter's website reveals a huge choice of guitars. Indeed, as a player in the market for a new rock guitar it can be confusing to nail down a specific model when browsing.

The USA-based company is clearly aware of this and the two guitars in the new C-1 family represent the first move towards streamlining and standardising the range, without necessarily deleting current models that may not fit into the new order.

Three body shapes, the C-1, the offset double-cut Tempest, and LP-style single-cutaway Solo-6, will now be available in either Standard or Custom configurations. An additional choice is the Hellraiser Series, whose distinction is based on spec rather than body-shape: each associated model features an EMG pickup set and Schecter locking tuners (unless loaded with a double-locking Floyd Rose vibrato) and, if finished in trans black cherry, a quilted maple top.

What remains above all is the brand's build quality, value for money and versatility - facets that the new C-1 models possess in spades.

A fundamental difference with the C-1 Standard, compared to its custom counterpart, are its lower-cost Duncan Designed pickups manufactured in Korea under Seymour Duncan's guidelines and based on the stalwarts of the American range. The layout and function of the controls, however, remains the same.

It's a slightly arched design that offers a nod in the direction of the classic Jackson Soloist as far as vibe is concerned and is top-edge bound in cream plastic. There's a belly contour, but no forearm carve and the cutaways, although not as expansive as those featured on an Ibanez JEM, give excellent access to all 24 medium-sized frets.

Maple is used for the top and if you opt for a trans finish rather than the black we have on test, the grade of flamed maple used is testament to Schecter's continuing desire to provide guitars of a lavish appearance that belies their asking price.

The neck is made from three pieces of maple and the feel and profile is just as described above. The fingerboard, however, is rosewood and features ivoroid dots. The tuners are chrome-plated Grover Rotomatics.

Powering comes from a master tone that doubles as a push/pull coil split.

Compared directly to its sibling the C-1 Custom model, the Standard lacks the impressive high-end and subsequently comes across sounding a little muffled. But on its own, however, the Standard ticks many of the tonal boxes we'd expect at this price point.

With a restrained rock setting, the bridge pickup gives adequate depth that remains as the amp's gain is increased but for more extreme tones, we'd suggest adding a tad more treble to the amp to allow it cut sufficiently.

For broader, more classic styles though, this is a true rock player's guitar. At the competitive figure of £549, the Standard plays as nicely as it's flashier sibling and, as such, is still a rewarding guitar. The phrase 'workhorse' can sometimes be negatively construed as meaning as 'bog standard': the C-1 Standard shouldn't be lumped into such a dour category.

Both guitars in the C-1 range are impressive to play and provide a good selection of tones. There's no doubt that the Custom represents the more preferable purchase option of the two but, to be honest, either guitar would suit both a beginner looking for their first serious electric or the needs of a more experienced player on a tight budget. It's nice to have a difficult choice on occasion, especially when neither option is the wrong one.