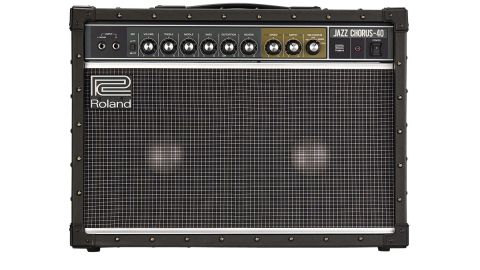 A worthy addition to Roland's catalogue, with enough volume to make it usable for small gigs, while the stereo input makes it an ideal partner for pedalboards and multi-effects.

It's not every day that a guitar amplifier celebrates 40 years of production, so when Roland's venerable Jazz Chorus range passed the milestone this year, what better way to celebrate it than with another new amp - appropriately named the JC-40.

The original JC-120 was the first product to feature Roland's smooth analogue Chorus Ensemble effect, arriving in the shops back in 1975 and pre-dating the first Boss CE-1 by around a year.

Despite a complete lack of valves, at a time when many other solid-state products were little more than primitive amplified fuzz boxes, the Jazz Chorus carved its own niche, with unique styling and an unmistakable clean sound that continues to form the backbone of many top player's rigs today, from Pat Metheny to Metallica. Away from stadium rock, we can't ignore the African influence that gained greater prominence in the 1980s, largely thanks to Paul Simon's Gracelandalbum. Make no mistake: the Jazz Chorus is the sound of African guitar.

Back in the mid 1970s, many players saw the Jazz Chorus as a more reliable version of another large valve-powered 2x12 combo, which was on practically every stage back then. Its unique look stuck in people's minds, and the sound proved to be the perfect foil for the heavy overdriven lead tones that were becoming more and more popular. 40 years on, the Jazz Chorus is still going strong in its original 120-watt format.

Now, we have a combo that promises the same great tones in a smaller package.

Essentially a scaled-down version of its big brother, the JC-40 features a pair of 20-watt output stages driving two 10-inch loudspeakers. The cabinet follows traditional JC flight case styling, with 'ready-rubbed' rivets on the front and silver dust caps on the loudspeakers behind the silver check grille-cloth. Inside the chassis there's a familiar-looking rugged printed circuit board holding most of the controls and front panel components.

The JC-40's control panel offers a single channel, with mono and stereo inputs and controls for volume, bass, mid and treble, alongside the amp's built-in overdrive and reverb effects. The chorus section has speed and depth controls, with a four-way switch that selects vibrato, off and fixed or manual control for the chorus.

On the rear, there are separate footswitch options for all three effects, together with a mono out/stereo in effects loop that can be run in series or parallel mode, a pair of line outs, and a speaker-emulated headphone jack that's ideal for silent practice.

The JC-40's stereo front panel inputs make it a perfect partner for players who use multi-effects floorboards, with wide-range clarity that will need a little tweaking if you want to keep some warmth in your sounds. We tried the JC-40 with single coil and humbucking guitars, both of which sounded equally impressive.

The built-in distortion is somewhat warmer and smoother than earlier models, while the digital reverb is smooth and spacious, with a decently long tail. The JC-40's chorus effect outputs a dry signal to one loudspeaker and a wet effect-only signal to the other, creating a three-dimensional soundstage that swirls and pulses in a very pleasing way. This is the core of the JC-40's sound - a distinctive and unique chorus effect that's been copied many times over the years, but it's hard to imagine anyone other than Roland doing it this well. You can control the speed and depth yourself using the Manual setting, or choose Roland's optimal settings with the Fixed option.

The vibrato effect adds another more vintage dimension with a wide range of speed and depth that covers ethereal, slow pulse effects to full-on surf. The JC-40 is also very pedal friendly, and sounds excellent with a high-end overdrive pedal plugged into the input jack.

One big selling point is how compact and portable it is: easily carried with one hand and small enough to fit on one seat of an average family hatchback, it's ideal for small clubs, practice or rehearsals. However, it is on the pricey side and faces stiff competition from many other mid-priced products with onboard effects, although not many are true stereo and none will have the JC-40's signature 3D wet/ dry chorus. If you fancy plugging into a little history, check it out.