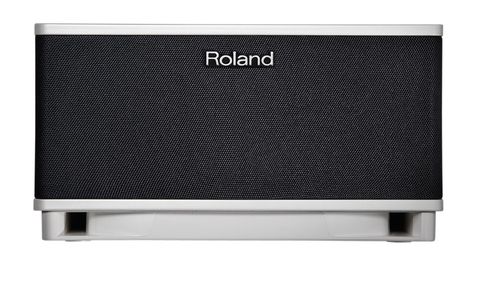 Neat little practice amp that will fit nicely into the domestic environment and let you plug in and play whenever you desire.

The latest addition to Roland's acclaimed CUBE range is an iOS-embracing practice amp in disguise, dubbed the CUBE Lite.

There are plenty of us who remember when a practice amp was merely a single-sound small combo amp, not too different in design from a larger one but with a lower wattage and a smaller speaker for quieter playing at home. Things have got a lot more sophisticated since then, though, with practice amps equipped with modelled amp and effects sounds, onboard backing tracks or connections for music players.

The latest of the genre is part of Roland's long-running CUBE series, the CUBE Lite, launched at this year's NAMM show. This new amp offers the company's COSM guitar tones alongside an iOS connection that not only enables you to play along with songs from your music library but also has an associated free app, CUBE JAM for iPhone, iPad, and iPod touch, which offers phrase-training facilities and lets you record your guitar playing.

Small enough to stick away on a shelf when you aren't using it, the CUBE Lite looks pretty stylish and is available in black, red or oh-so-modern white to suit your surroundings.

The business end puts out 10 watts through a basic stereo-plus-subwoofer setup that produces an ample amount of volume without disturbing the neighbours. If you prefer silent, though, plugging in a set of headphones will mute the speaker output.

For your guitar, you get three COSM amp models, the first being an emulation of a clean Roland JC model, then increasing amounts of distortion with the Crunch and Extreme models. As well as an output volume knob, there is control over the amp's drive, bass and treble plus effects - you can have a variable amount of either chorus or reverb.

The variable drive control can add a bit of grit to the JC sound and steadily increase the distortion on both of the other already overdriven models, so you get a range of sounds to cover all scenarios - from clean chording through raunchy chord work, and edgy lead tones to fat saturated lead with plenty of sustain and metal riffing.

To our ears, the sounds worked best with a touch of reverb, especially to sit your sound in with the other instruments when playing along with other music. To do just that, there's an aux input with an independent volume knob for plugging in the likes of an mp3 player or phone. This is also the i-CUBE link connection to an iOS device, which allows two-way communication (playback and recording) with the aforementioned CUBE JAM app via the supplied cable.

The first thing that the app lets you do is to choose a track for playback from your music library. There are play, fast forward and rewind controls for a song, plus very easily applied changes. You can speed it up to 150 per cent or slow it down to half-speed, you can change the key/pitch up or down by six steps, and you can apply centre cancelling, which should minimise any vocal or guitar that's panned dead centre. Setting up any section of the song as a repeating loop is dead easy, too.

If you want to record a new guitar part to any song, just get comfortable by adjusting the volume of your guitar and backing music independently and drop into record - you can record the COSM tones or just use them for monitoring and record a dry guitar sound.

When you've finished you can mix down, adjusting the volume of your guitar and backing music independently, and export your mix as a 16-bit, 44.1kHz .wav file. It's all very easy to use and a practical way to learn and practise existing material, or to get creative and archive the results.

Playing back recorded music usually needs a different amp/ speaker system than you'd use for electric guitar sounds, but Roland's CUBE Lite happily takes care of both. No, it won't replace your big, 'proper' amp in the rehearsal room; what it will do is provide a useful, good looking system that's tailor-made for practice and home playing. At this price, who wouldn't want that?