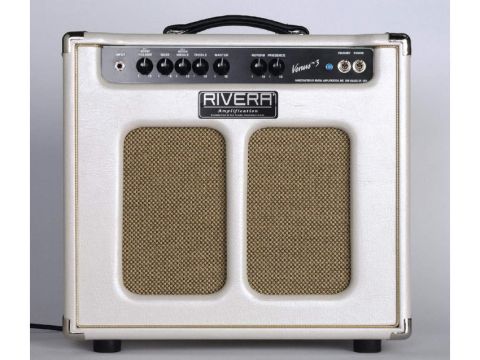 If you want the best in build quality and tone then the Venus 3 is a real contender. Check it out soon!

The pull notch on the mid-range aims to copy classic American Tweed and Blackface EQ.

The rear Vintage/Modern switch rewires the output valves and drops the power.

The current flagship of Rivera's popular two-channel line is the recently-introduced Class A Venus 6, which has now been joined by a single-channel version, the Venus 3, that's threatening to become one of the best recording amps money can buy.

Can this little combo live up to the hype though? Let's take a closer look…

Like all Riveras, the Venus 3 is built to a higher standard than many of its competitors, with a tough ply cabinet, a removable speaker grill and a rear panel that's bolted into place - there are no flimsy woodscrews here.

Look closely at the Venus's trademark pearlescent cream vinyl covering and you'll notice there are no cuts to be seen anywhere, even on the radiused inside corners of the speaker grill - that's not easy to do and few companies match this standard.

The front panel is straightforward enough, with controls for gain, volume, and a three-band EQ. There are also level controls for presence and the Venus's built-in spring reverb.

No Rivera would be complete without at least one pull switch, and the V3 has two: the first is a pull boost on the gain control; the second is a pull notch on the mid-range, which works to approximate the two classic American EQs - tweed (more 1950s in influence) and blackface ('60s).

Move around to the rear and you'll find a simple series effects loop (meaning no level control), a fixed line out and a Vintage/ Modern switch that rewires the output valves in triode mode, dropping the power to around seven watts and enhancing even harmonics - perfect for home use or recording.

Inside the sturdy steel chassis - even though it's smaller and simpler - everything is still unmistakeably Rivera, with most of the electronics on a top-quality aerospace grade PCB, securely held in place by metal standoffs.

Overall, the V3 retains Rivera's typical pro power tool vibe, while that classy vinyl finish looks equally at home in a living room as it does in a recording studio.

It's pretty obvious that this amp doesn't have the immediate flexibility of the footswitching dual-channel Venus 6, but after a few minutes experimenting with the tone controls it's also obvious that in a studio, where you don't need to access sounds instantly, the V3 is easily capable of providing the same instantly gratifying Class A vibe.

There's some of the natural squeezing of bandwidth that you get when using a smaller driver - less bass tends to accent the mid-range frequencies, which can make 1 x 10s sound a little nasal and boxy - but Rivera counters this with a very flexible EQ and a nicely-voiced custom Eminence loudspeaker, making it quick and easy to get some great rhythm and lead tones for a simple 16-track commercial mix.

The range and quality of distortion is what most people will buy this amp for - it's easy to pile a lot of gain into a preamp, but very difficult to take that and make it stable and dynamically responsive. Very few amp designers do this trick as well as Paul Rivera.

The V3 can go from gently overdriven, chiming chords to massive shredding distortion with the boost engaged; and it's all highly useable, with those powerful tone knobs making it easy to take the V3 from scooped-mid LA thrash to the buttery thick mid-range of Brit-influenced classic rock or blues.

And in between those extremes there are some absolutely killer vintage tweed and blackface effects.

The powerful EQ needs to be used with care - its range means there a few settings you probably wouldn't want to use.

For example, pulling out the mid notch on an already scooped mid sounds a bit like fingernails on a blackboard - but with very little effort you can also find some sublime tones that are everything you would expect from an amp with the Rivera badge.

The cleaner sounds are very good, but not truly exceptional, and better to our ears in the Modern mode than the roughly half-power Vintage setting.

The vertical spar in the speaker grille acts as a beam blocker, so besides looking good, it diffuses the higher frequencies and adds to the V3's airy and open treble response if you mic from medium distances.

However, the slight lack of bass from the 10-inch driver means that the Venus 3 doesn't quite achieve the jaw-dropping three-dimensional richness of its bigger brother.

Having said this, with the grille removed (it's held on by Velcro tabs) and mic'ing very close to the cone as well as from the rear of the cabinet, you can find some highly useable tones that sound a lot bigger than the box that's generating them.

The V3's noise levels are very low indeed, even with the amp's reverb level wound up - not that you would do this too often as like some other small Rivera amps we've tried, the V3 has too much reverb on tap; anything beyond about 4 is only really useable as a special effect.

Overall, the Venus 3 is a killer small combo with a massive range of tone from a very simple and straightforward control panel.

Don't be misled by this amp's sweet and innocent appearance, it's capable of insane overdrive and distortion as well as fat, classic vintage stuff, and special effects like feedback and pinched harmonics are easy too.

Like most of Paul's amps, the Venus 3 actually makes you play better just by making all of that stuff happen without you having to try too hard.

If you want to use the amp for cleaner stuff, then we'd advise going for the 12-inch version, but for anything that needs a little overdrive this amp won't disappoint.

Perfect for studio use at any level, the Venus 3 also looks the business. It's not the cheapest 1 x 10 combo out there, but few amps can deliver this range and quality of tone, so we think the price is about right.