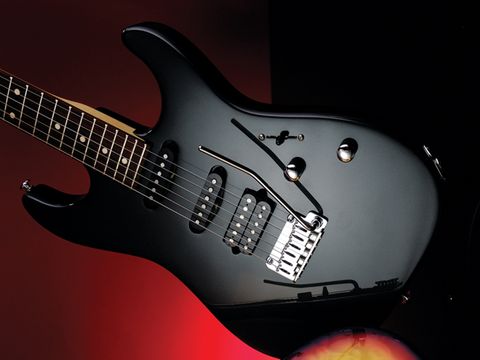 The Rasmus comes with hugely versatile Suhr pickups and a simplified vibrato system. Its plain Jane looks should help it appeal to a wide range of players, too. Now, if we can just sort out that naff headstock logo.

Rasmus guitars are the brainchild of John Suhr, one of the most respected luthiers in the world. John counts studio ace Mike Landau and Guthrie Govan as endorsees of his work.

Unlike those guys, we can't afford a US-made Suhr so John has thrown us a bone with the launch of a more affordable Chinese-built Rasmus range.

Suhr's spec'd North American alder for the S100's body, a bolt-on North American maple neck and a fingerboard made from a thick slice of Indonesian rosewood.

The Rasmus also has a slim C-profile neck that should suit any player. The fingerboard has a 16-inch radius that, paired with 22 jumbo frets, makes string bending above the 12th fret buttery smooth.

Despite being of Chinese origin, each Rasmus gets a fret-dress on a Plek machine at the Suhr factory in the US too. The S100 has a Gotoh 510 vibrato matched to a set of locking machineheads. You can't pull back on it as far as you can on a Floyd, but the tuning is rock solid.

Our guitar comes with a high-output, US-made Suhr SSH+ humbucker at the bridge and a pair of ML singlecoils. The MLs are based on the pickups in the vintage Strats of studio ace Mike Landau.

The bridge humbucker is frankly awesome. It has power and great note separation, no matter how heavy the gain on the amp is set. The singlecoils have a glassy sparkle that sounds authentically vintage to us.

The interesting thing about the Rasmus S100 is how it has been debated on guitar forums. Some have suggested that it's just too expensive for a Chinese-made guitar, that John Suhr will alienate owners of his US-made guitars and that the quality won't be up to much.

We should point out that the people making these statements also admitted that they hadn't played a Rasmus. Well, we have and we reckon the S100 is a pro-standard guitar with flawless playability and a fantastic tonal range.

If you don't think a Chinese-made guitar can justify an outlay of £899, bring your ass down for the Rasmus S100 to kick.