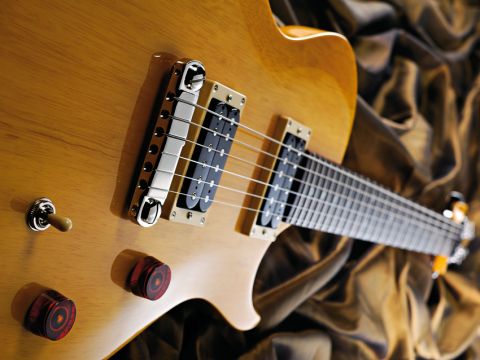 A highly affordable PRS guitar that recalls the resonance and life of guitars from yesteryear at a snip of the price of a US model.

While it's the high-line US PRS guitars that get the headlines, the company's more affordable Korean-made SE line has built a strong reputation since its introduction in 2001. Now in 2010, and with the current dire economic backdrop, the SE line is looking even more attractive.

But rarely do the SEs receive much trumpet-blowing and, before we get to look at the main 2010 additions launched at this January's NAMM show, here's an example of a cracking guitar released at the end of 2009 that's in danger of slipping under the radar.

Following the SE Singlecut pattern, it closely replicates the USA model in outline, but has a thinner body (approximately 44mm thick) and a contoured rather than fully carved top. The neck shape apes PRS's
wide-fat profile, the bridge is a Korean-made version of the USA Stop-Tail, and the dual humbuckers - the standard SE pickups - were designed in the USA but are made in Korea.

Yet, as its name indicates, this Singlecut's major calling card is that it's made from solid korina, as opposed to the Far Eastern mahogany used extensively throughout the range. PRS's USA line has already used African korina (also know as limba) for the McCarty Korina and KL Series, but it's the first time it's been used in the SE range, meaning that the guitar will sell on the street for around £500, including a pro gigbag, as opposed to the two grand plus for the USA models - perfect credit crunch credentials!

But it's not just the price that's attractive: not only is this a finely made, simple guitar that's light in weight and highly resonant but, plugged in, it will change your opinion of supposed 'low-end' guitars.

Strapped-on the guitar is way less bulky than a USA SC. The frets are finely fitted and slightly lower in profile, giving a nice vintage-like feel. Our sample's tuners feel a little sloppy but, with a couple of minutes stretching strings and tightening them, it's ready to rock. And rock it does.

Clean, there's an almost Fender-y texture to the tone, a little more breathy in the mids perhaps than mahogany and with a touch more percussion. The pickups are well-balanced with a medium output that
crunches nicely for a very lively classic rock attack. The bridge pickup has plenty of clarity but isn't over sharp, the neck is smoother but not over dark and the middle position is more hollowed and rhythm friendly.

Moving up the gain scale there's a Junior/Special-like vibe and the resonance of the guitar belies its price. It's not too 'soft' either, as some lightweight guitars can be - it's got a strong attack but with rich and creamy width.

The volume tames the highs a little as it's reduced and, although fully off the tone control is a little too woolly, pull it up a little and there's a wonderful 'sweet spot' that really does scream old Gibson. It's a great player, too, and proves very hard to put down.

Simple is best, right? If that's your style then we strongly suggest you plug one of these in. Apparently not everyone has taken to the 'too bland' vintage amber-only colour, but to us it not only recalls the classic korina Gibsons but also the hallowed TV Specials. The fact that it gets more than close enough to the juicy, lively and resonant sounds of those guitars illustrates just how good this guitar is.

On paper, it makes a great guitar for a younger player, or a spare for a more mature one. In reality, if you like simple lightweight guitars with resonance aplenty and a classic rock vibe that adds a little Fender to the stew, then don't be surprised if you fall for it.