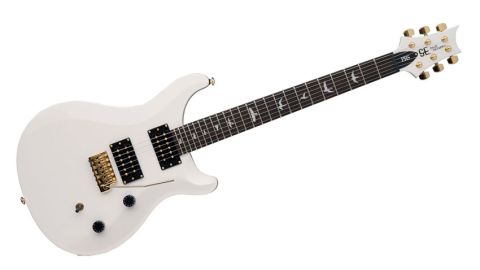 If you're after PRS quality on a budget - and dig the colour scheme - then the SE Dave Navarro is the guitar for you.

Let's see, we've got that familiar PRS outline, a Jet White finish and gold hardware: it's obvious we're dealing with a Dave Navarro model here, except this time it's a fraction of the USA-made model's £3,100 price tag.

Its release makes Dave the third PRS artist to receive both a USA-made and SE signature model, along with Carlos Santana and Mark Tremonti. A quick glance down the spec list reveals that - other than a few cosmetic differences - this guitar is near identical to the recently revised SE Custom 24, and close to Navarro's more expensive signature model.

PRS SEs are known for being some of the most consistent and playable guitars in their class, and your first few minutes with the Navarro will show you just why that is.

All the PRS hallmarks are there, from the exceptional balance and build quality to the slick and playable neck. This particular model sports PRS's Wide Thin neck profile, a modern profile with a curvy carve that feels lightning fast for fingerboard acrobatics, but not quite as skinny as an Ibanez or Jackson.

It's plenty comfortable for chords and lead work alike, and combined with a 635mm (25-inch) scale length, sits perfectly between Fender and Gibson for a feel all of its own. As always, the frets are polished and fitted to perfection and the bird inlays add a touch of class.

As with the other new and revised 2012 SEs, the Navarro features a subtly bevelled maple top under the block white finish that adds clarity and punch to the mid-rich mahogany back and also brings the guitar visually closer to its USA-made counterpart.

Nestled away in the body are the usual SE HFS and Vintage Bass pickups, which, like on the SE Custom 24, are also coil- splittable. The HFS ('Hot, Fat and Screams') humbucker is every bit as versatile as the name suggests, offering plenty of grind but also the definition to keep saturated chords clear.

On clean tones, the Vintage Bass comes into its own, with a thick, smouldering tone that sounds beautiful with just a little bit of dirt dialled in. The coil-split tones might not quite have the character of proper single coils, but there's enough spank and jangle to make them more than serviceable.

PRS's vibrato system is as reliable as ever, too, but you may want to invest in some locking tuners for any serious whammy action.

The Navarro is undoubtedly a great guitar, but is it our new favourite SE? Not quite. In an increasingly crowded line-up of SE instruments, this guitar struggles a little to stand out from the crowd, especially next to the SE Custom 24 and Orianthi models. The simple fact is that this guitar's looks will likely split opinions right down the middle.