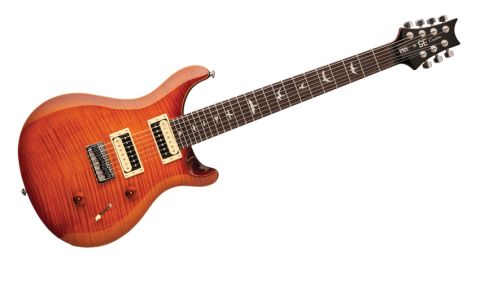 The most impressive thing here is that, with the company's first seven-string guitar, PRS has absolutely nailed it.

We all know about PRS guitars: they're pricey trophy instruments for only the most über of rock stars, right? Wrong. The Korean-built SE range has become a big player in the mid-range market, with solid, playable workhorses that feature much of the quality of the US PRS models, without the flashy looks.

One such guitar is the PRS SE Custom 24 7-String. Unbelievably, it's PRS's first ever production seven-string model, and there are a few cosmetic differences that have helped to bring the price down.

First, there's the maple cap. On the US-made Custom 24, this is a piece of highly carved, figured maple. On the SE, it follows the same silhouette, but it's almost slab-like, with just a slight bevel around the edges for comfort.

But the top is still solid maple, and it's faced with a flame maple veneer - it's just not quite as blingy or expensive as the maple of the USA guitars.

Another change comes courtesy of the 7-String's neck, which is maple rather than mahogany, with a rosewood fingerboard and PRS's distinctive bird inlays. They're pretty, but when you pick this axe up, it's all business.

All 24 frets are mirror-smooth, and the double-cut body means you can get right up to the widdly end unimpeded, and the neck, with PRS's Wide Thin carve, is almost implausibly comfortable. The 7-String's action is low, and the fretboard is comfortably rounded.

The seventh string isn't just an add-on to be used for intermittent riffs between solos; it's a seamless part of the guitar, providing an extra dimension to everything you do - and it feels so natural, you forget you're playing a seven-string. It's as if you've suddenly grown an extra finger. Magic.

Seven- and eight-string guitars are traditionally aimed at metal guitarists, but while skull-crushing distortion tones are available, they aren't this axe's forte. With the gain cranked, the SE HFS and Vintage Bass can be a little too muddy to be useful. Turn the gain down, though, and the genius of the 24 7-string reveals itself.

Pull the tone pot to split the pickups into single-coil mode and you're rewarded with extra crispness and attack, while full humbucker tones offer plenty of bite with more mids and bass, but without any one sound overwhelming the others. It's a great classic rock guitar, and the expanded chordal possibilities offered by the extra string make it a tempting jazz machine, too.

The budget SE range of PRS guitars puts affordable quality into the hands of non-millionaires. We approve.