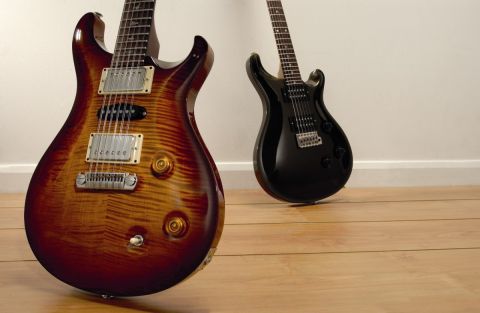 The Custom 22/12 is not just a new PRS guitar, it's a thorough reappraisal of the electric 12.

PRS's first production line 12-string has clearly had a difficult birth. We're looking at only the second one to be shipped to the UK - over a year after it was officially launched in January 2004!

Far from a mainstream instrument, the Custom 22/12 aims to be the most luxurious electric 12-string outside of small custom shops. At the other end of PRS's USA line is the bolt-on CE Mahogany, making a welcome return after some five years.

As a custom guitar maker, Paul Reed Smith's pre-factory career produced a smattering of electric 12s. "I made my first 12-string in about 1977," remembers Smith. "It was a Flying V 12-string for Peter Johnson. The second one was for Al DiMeola," then with Return To Forever; Heart's Nancy Wilson bought a 12-string while both Neil Schon and Carlos Santana purchased 6/12 double-necks.

PRS Guitars made its first electric 12 in 1995, in the Guitars Of The Month programme, a precursor to Private Stock that has produced a small number of one-off 12-strings for well-heeled purchasers.

"Even though there aren't that many, we've made them consistently over nearly a 30-year period," says Smith. Clearly PRS plans to make a lot more as, although it's far from cheap, the production 22/12 costs a lot less than a Private Stock guitar.

Why did PRS decide to bring such a niche instrument into the production line? "Because we believe we're good at it," states Smith, "and because there's a need for good 12-strings. Most available 12-strings are hard to play, and we thought if we did it right, there would be real interest."

Outwardly the Custom 22/12 is simply a 12-string version of the Custom 22, but closer inspection perhaps reveals the reason why it took so long to ship.

Aside from the elongated headstock (around 40mm longer than the six-string), necessary to hold the additional six locking tuners, there's a new nut moulding that had to be designed and produced, a new neck carve, new 12-string pickups, and probably most complex of all: a 12-string version of PRS's adjustable Stop-Tail wrap-over bridge.

Didn't PRS feel the need to reinforce the neck? "No, our necks are strong enough," says Smith. "They're built of very high-quality, stiff mahogany. Historically, electric 12-strings usually have exceptionally heavy gauge strings. We have a custom set on these guitars that sound great but don't pull like steel cables. In addition, our double action truss rod works great."

The carefully spaced dual strings - the extra strings are on the bass-side, which is the opposite of a Rickenbacker, but standard for virtually all other 12s - at both the nut and bridge, along with a low action, all combine to make easily the best-feeling electric 12 this reviewer has ever encountered.

"It was based on the bridges that Paul and John Ingram used to make from a Badass six-string bridge, where they would cut the saddles in half and put the bridge back together. I always found that to be pretty clever."

The 12 miniature stainless steel saddles are all intonation adjustable, there are even dual tracks for the strings as they pass over the rear of the unit from where the ball ends anchor in the lower half at the front of the bridge.

There are no visible intonation screwheads, but along the top front of the bridge are 12 very small holes that allow you to tweak intonation with a small Allen key - highly fiddly and not for the long-sighted!

Only slightly sharp top edges to the outer saddles ruin the fun - a slight rounding here would make an amazing design perfect.

The new pickups are, "based on West Street (the location of Smith's original workshop in Annapolis) prototypes from 25 years ago, and John Ingram had a lot to do with the design. The output is about normal, but they're very clear," says Smith.

Along with new covered 'buckers, we get a three-way toggle selector, master volume and tone. A pull/push switch on the tone control introduces the centrally-placed Lindy Fralin single-coil as well as automatically splitting the bridge humbucker to a single-coil (neck facing).

"The Fralin 'Blues Special' is a wonderful, traditional single-coil with slightly more output than an old Strat pickup," says Knaggs.

We asked Paul and Joe what makes a great electric 12. "String spacing (both at the nut and the bridge), string gauge, set-up, neck curvature, neck shape and action height are all very important," was their unanimous reply. Time to have a listen…

While the 22/12 isn't neck heavy when strapped on, there is a sense of girth as soon as you clamp your left-hand around the neck and strings. At first things feel, well, as if you're playing with a glove on, but once you become adjusted to the dual strings you're soon copying your fave Tom Petty, Eagles, Beatles, Zep riffs…

you know what we mean. For many, that's as far as we get as we put the electric 12 back on the shop wall. But the 22/12 is more inviting. Tuning is spot on and very stable - essential for any electric; ultra-essential for a 12.

And the sounds… first off you'll be checking if your chorus pedal is on, then you'll notice that the humbuckers are relatively low in output.

The bridge sound is direct and there's plenty of strident jangle, the neck is beautifully mellow and with delay plus volume swells you can create some lush soundscapes. Pulling in the single-coil and the bridge coil-split adds a little texture and mellowness.

With all three pickups on it's a very wide and broad tone, the neck and single-coil knocks off a little high end but again there's richness. In fact, it sounds like two different 12s: the more direct strident tone of the 'humbucker' mode contrasted by the mellower, more textured and wider sound of the 'single-coil' mode.