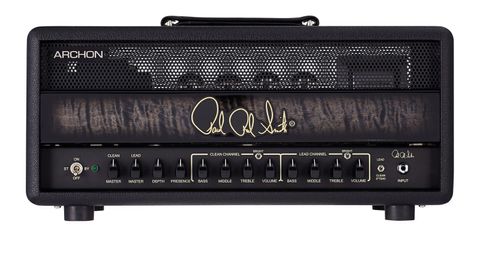 A great head from PRS that hits the bullseye and will give the established competition a tough time.

PRS has flirted with amplifiers several times over the last three decades, but its backline designs have never taken off in the same way as the company's guitars. However, that bogeyman might finally be laid to rest with the arrival of a new range called Archon.

Coming from the ancient Greek for 'leader' or 'master', the Archon collection is a competitively priced (by PRS standards) range of amps aimed squarely at the modern metal player, but with enough sonic flexibility to cross over into other styles of music.

With other Archon products due to arrive in the UK over the next year, here we're taking a look at the range-topping 100-watt head.

The Archon's no-frills design is pure PRS, with a large gold badge sat on a charcoal-burst flamed maple fascia trim. Above this, there's a simple perforated steel grille, with another to the rear aiding ventilation.

The woodwork is very clean, with big radius'd edges that echo classic 'Plexi' designs. It's compact but quite a heavy beast thanks to two massive transformers. The robust chassis has a black powder coat finish and clean white lettering, making front- and rear-panel controls easy to read.

The Archon is largely hand-wired; the small preamp components are arranged on a heavy-duty PCB strip configured in a standard turret board layout, with a separate board for the output stage components and diodes, and a third board supporting an impressively large bank of capacitors.

All front- and rear-panel components, along with the valve bases, are mounted direct to the chassis, with wires leading to the boards. This traditional construction method separates PCBs from the heat generated by the valves, adding significant long-term reliability.

There's a lot of wire inside, which is neatly routed and tied, with clean soldering. The overall impression is of a busy but well-sorted design, built to take the punishment of continuous touring in its stride.

The Archon's control panel is easily understood, with two sets of gain, EQ and master volumes, with global presence and depth controls. Both channels have a small bright switch, and the power and standby functions have been combined on a single three-position toggle switch.

A similar switch is used on the rear panel for impedance changing - we'd prefer to see a recessed type here, to properly protect that expensive output transformer.

Other features include a footswitchable series effects loop and comprehensive bias test points for the output valves, along with a half-power switch.

The front-panel rotary controls are all heavily damped, high-quality Alpha pots, a relatively small detail that makes a significant contribution to the Archon's luxury 'boutique' vibe. They're also quite practical, as you can make precise setting adjustments and feel certain that the pointer knobs will stay where you left them.

The Archon is aimed at the modern metal player, combining a big, open clean channel with a very high-gain lead channel.

There are no less than five gain stages in the preamp; most modern rock amps have three, giving the Archon the equivalent of a built-in overdrive pedal in front of an already high-gain front end. Despite this, the amp is well behaved, with minimal hum and acceptable hiss, even at higher-gain settings.

One of the Archon's secret weapons is the flexibility of the lead channel gain control. At lower settings, it's bright, punchy and very usable, with a sweet hot-rodded Plexi growl. Classic rock players will probably never need to turn the gain control beyond 10 o'clock; however, as you push things around to two o'clock the Archon's colossal overdrive takes over, with a searing harmonic-laden sustain and powerful midrange, which stays warm without being overly peaky. The treble is edgy but sweet, while the fast, tight bass response is perfect for metal and detuned instruments.

The clean channel swaps huge overdrive for huge headroom, with massive clarity and a subtle edge at higher-gain settings that reminds us of the original hand-wired Hiwatts.

Add the lightning-fast dynamic response of that supersized power supply, and it's not surprising that the Archon has also found favour with many of Nashville's elite country pickers.

It's about time PRS had a hit with one of its amps, and we reckon the Archon is right on the money, with good looks, great tone, plenty of flexibility from a simple control panel and, most importantly, a relatively affordable price.

With the 100-watt head selling for around £1,650 on the street, the established names in this genre are about to be given a hard time. With many top players already on board, and more affordable amps on the way, we reckon the Archon range could easily turn out to be a major success for PRS.