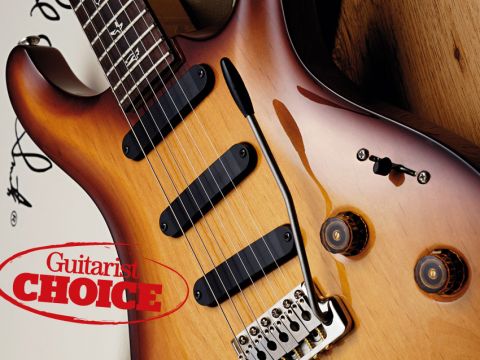 A union of PRS's renowned build quality and Stratocaster-inspired tones, the 305 is a superlative take on Fender's #2 son.

The dual humbuckers that grace so many PRS guitars perhaps pigeonhole them as coming more from the Gibson side of the tone tracks. But from the first PRS guitars - such as the 25-year-old Custom, still PRS's bestselling instrument - PRS has offered single-coil tones via the original five-way switching and the later 'McCarty package'.

And don't forget the smattering of guitars over the past quarter-decade that have featured true single-coil pickups, such as the 1988 Studio, the USA-made EGs, the later 513 and the SE EG. The 305, however, could be correctly seen as PRS's first 'proper' attempt to nail a more accurate Stratocaster-like single-coil sound.

It seems PRS's artist programme was the genesis. "Basically Winn [Krozak, who heads up PRS's artist liaison] couldn't do his job without this guitar," Paul Smith told us recently.

"There were too many people that wanted that tone. It's like the player is missing the colour blue, he needs that colour to paint."

The body is alder, slightly thicker than standard, joined to a maple neck in a different manner from standard PRS guitars. Under the neck heel, the body sticks out to 'grab' more of the neck. This is a feature Smith conceived to increase the guitar's low end.

Other changes to narrow the gap between PRS's usual recipe and that of Fender include the use of 250k volume and tone controls and a 0.05 microfarad capacitor.

Like the neck joint, the 305 uses another of the 513's subtle features: a compensated nut. PRS has always used a compensated nut - the nut is moved slightly closer to the first-fret position to improve lower position intonation - but the 513 was the first to advertise the fact. Similarly here, its front edge is angled slightly closer to the first fret on the bass side to tweak the tuning further.

The 25th 305 comes with other celebratory features: the 25th Eagle on the rosewood-faced headstock, black/white Corian shadow bird inlays, 513/ DGT fretwire and a bone-coloured case: watch the dirt.

Imagine a good Strat with increased low-end colour, smoother but still biting highs and a little added mid-range fatness. Then add in superb sustain, immaculate intonation and playability and an excellent in-tune vibrato system and you have a real 'supercar' version of Fender's finest.

Compared to the girth of a Singlecut, the 305 cuts, but is rarely ear-wearing. It has much of a good Strat's explosive twang on clean, reverbed amp tones, but whereas a Strat isn't always what you want for higher gained sounds, the 305 is more than happy.

The guitar cleans up very nicely (the volume control has PRS's typical treble bleed capacitor) and the tone control is, as ever, super smooth if you need to tame the highs. There's no lack of percussive bounce from the feel either.

Our only criticism is that, unlike many upper-market Strat-style guitars, the middle pickup isn't reverse-wound with reverse polarity to cut out hum on the mixed pickup positions. "You're the first to mention it," says Smith. "You're right and I'll fix it."

Built to the company's usual ultra-high standards this 25th Anniversary guitar certainly dishes-up a different flavour, or provides a different coloured crayon as Paul Reed Smith would have it.

The 305 doesn't just lean into the Fender camp, it sits right in front of the fire: an elite-level version of Fender's finest that will, by its design, not only give PRS fans that 'missing' sound but might also bring in players who like the idea of PRS, but need single-coil tones.

"The 305 has big, fat, open but a little darker single-coils," Paul Reed Smith tells us, summing up. "I've never been able to make a humbucker that sounded exactly like a single-coil… and this is interesting, some of the humbuckers on old '59 Les Pauls were so bright they almost sounded like single-coils - we don't make pickups that bright."

Our only dilemma is, between this guitar and PRS's other 25th Anniversary model - the Swamp Ash Special Narrowfield - which one we prefer, and with PRS's 2010 Experience just around the corner - usually the time when next year's models are announced - and the fact the 25th 305 is a limited run of 305 only, time is running out for us to choose. Don't say we didn't warn you!