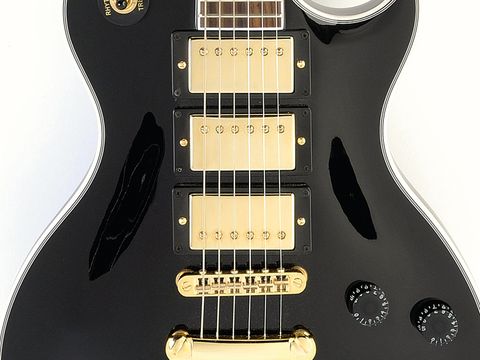 Playability, tone and price: sometimes the best things really do come in threes.

At first glance, the Peavey HP Single Cut SC-3 comes across like a gene-splicing exercise between a triple-humbucker Gibson Les Paul Custom and a Paul Reed Smith Singlecut.

The SC-3's slim body, combined with a contoured back that nestles against your ribcage, echoes the PRS spec - or an Eclipse if you're more familiar with ESPs and LTDs.

No award for originality, then, but the affordable SC-3's beauty is more than skin deep.

Exhibit A is playability. The 22 jumbo frets and 14-inch fingerboard radius make for easy string bending. The chunky D-profile neck proves once and for all that you don't need a lollipop-stick-thin neck to play fast.

The three humbuckers have Alnico magnets hidden below their respective bobbins. The bridge pickup has the highest output, while the middle unit has a slightly lower output and the neck 'bucker's is lower still.

The SC-3 control layout is the reverse of the classic Les Paul, which means that the bridge pickup's volume and tone are located closest to the strings; the neck 'bucker's controls are nearest to your kneecaps. The bridge humbucker tone control doubles as a push/pull pot to activate the middle pickup.

With the control pushed down, the pickup toggle switch offers the classic twin humbucker setup: bridge only, both pickups on, neck only.

The control pulled up equals the bridge and middle on, neck and middle engaged and all three pickups on at the same time.

Those guys sum up the SC-3 vibe. Its mission is to dish out the classic rock tones that humbucker geeks dribble over. Even with all three pickups engaged, you get a fat warm tone, not an unusable howl.

Some players worry that the middle humbucker will get in their way when they pick or strum. We had no problems with this guitar.

There are two other models in the Single Cut range. The twin humbucker SC-1 (£191) has a bolt-on neck, basswood body and chrome hardware. The Single Cut SC-2 (£212) shares most of the SC-1 spec but you get a set neck.

Both guitars are available in vintage tobacco sunburst, gloss black and cherry burst.

Take our advice: let the piggy bank pile on a little more pork and bag the SC-3. Okay, close scrutiny reveals some sloppiness in the body binding, and the machineheads could be better quality, but the playability and tonal range on offer make a mockery of the modest price tag.