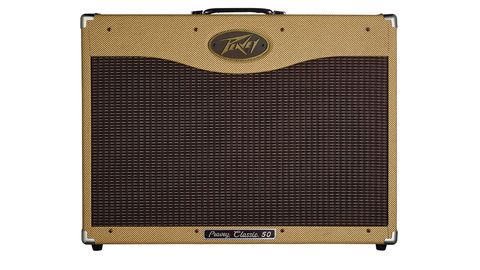 The build quality, features and above all the sound make the Classic range good value for money.

Introduced in the early 1990s, the EL84-powered Classic amps appeared on the back of a resurgence in vintage amp interest and the beginning of the boutique amp movement after the rack excess of the 80s.

They had a strong resemblance to the 1950s Fender designs that inspired them, with chrome steel chassis, handsomely proportioned 'narrow-panel' tweed- covered cabinets and chickenhead pointer knobs that went not to 11 but 12.

A few years ago, the Classics received their first big facelift, with a slightly revised cabinet design and minor circuit changes. Possibly the biggest change was the one least noticed: a printed note silkscreened on the rear of the chassis announcing that the Classics were now manufactured in China, instead of the company's Meridian, Mississippi base. With UK distributorship now handled by Barnes & Mullins, it's an opportune moment to remind ourselves why the good ol' Peavey Classic continues to be a hot favourite.

The Classic 50 amps have Peavey's newer cabinet style, with a dropped lozenge in the top panel holding the Peavey badge. The twill covering has been very neatly applied and sits nicely with the brown/gold speaker grille cloth and chrome steel chassis - unmistakably influenced by Fender's tweed amps of the 1950s, which are often quoted as the genesis of the modern guitar amplifier. The famous Peavey Blue Marvel loudspeakers have been replaced by Stephens Tru-Sonic 12-inch drivers.

Inside the chassis, the amp sports a typically clean and neat printed circuit board, which hold most of the electronics; there's also a slightly redesigned layout that should help to improve long-term reliability.

There's a volume control for the clean 'normal' channel and old-style Peavey 'Pre' and 'Post' gain and volume for the drive channel, together with a reverb level control and bass, mid and treble knobs.

It's good to see Peavey has kept the very useful series effects loop on this amp and added a standby switch, while the footswitch and extension speaker sockets are on the back.

The overall vibe is still typical Peavey: built to handle the kind of use and abuse that a busy working musician typically dishes out, while looking clean and refined. The amp includes a two-button footswitch for changing channels and operating the boost function.

While the tweed references are obvious, this Classic amp is not a copy and has unique circuits that produce the tweed sound but with more overdrive and tonal range. The amp was well behaved electrically, with practically inaudible hum, low hiss and pop-free switching.

There's a hint of overdrive as you turn up, which adds a subtle edge to chords and single notes. Used with a Strat or Tele, this is ideal for country picking. The 'quack' of the in-between switch settings on a Strat sound especially prominent, with a snappy treble and fast attack. Swapping to a Les Paul or an archtop and using the neck pickup with a touch of reverb provides an excellent jazz tone - warm but with a slight growl that can be used for emphasising phrases when you pick harder.

Meanwhile, bridge humbuckers sound great for rockabilly and redneck jazz, while using both pickups together on a Les Paul or Tele generates a superb buttery rhythm sound that's perfect for funk chord riffs.

Coming onto the loudspeaker, the dual 12-inch Classic 50 enclosure has plenty of clarity and an emphasis on fundamentals.

The Classic lead sound is similar to the clean channel - a well judged blend of tweed grunt and 'blackface' snarl that works with most guitars equally well and brings out the individual character of guitars, so Teles really sound like Teles, Les Pauls really sound like Les Pauls, and so on.

Lower gain settings are perfect for blues and country, while kicking in the boost adds a healthy dose of drive and harmonics, taking the Classics into 1980s ZZ Top territory.

This amp has plenty of volume to handle live gigs. The Classic 50 with its 2x12 enclosure, is louder than the recently-released Classic 30, so if you need clean headroom for proper country licks, this should be one of your first choices.

The Classic 50 appears to have benefited from a number of circuit improvements that haven't changed the sound but have had a positive effect on performance. The new Classics are quieter in operation, with less hiss and hum, switching is quieter, and the sounds are more focused than their predecessors, with a sparking treble and better low-end punch, thanks to an improved output transformer.

One thing all the Classics have is plenty of character, with a tone that borrows the best tweed bits and adds a little extra drive with a more restrained midrange. Tweed-influenced, sure, but they have their own thing going and sound great in a live gig environment.

It's easy to see why Peavey's Classic range continues to be so popular; these are very versatile amps, but unlike many of their competitors, there's plenty of character, too. Often, an amp that tries to be all things to all players loses out on tonal depth and authority, but that's not the case here.

Despite the clean and drive channels sharing a common EQ, there's enough flexibility to handle most needs and a common setting almost always works for both sounds. Players looking for more modern, aggressive rock and metal sounds won't find them with the Classics, although there's still plenty of gain and drive to deliver excellent crunch effects and soaring classic rock solos.

Pricing is fairly reasonable, although a change in policy means the current Classic amps aren't the bargain that they were some years ago, and they're up against stiff competition from their biggest rivals.