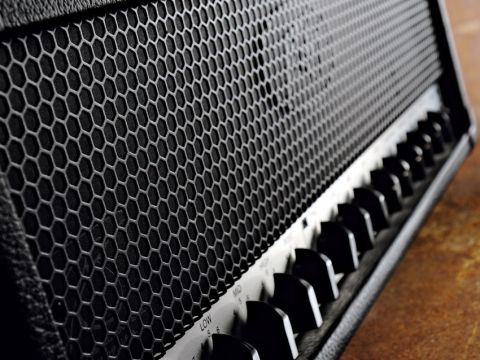 Not many amps provide such a good metal tone, let alone a decent clean and crunch too. A highly credible, more Marshally flavoured take on the much-loved 6505+.

So all this started with Edward Van Halen and the 5150 amp back in 1991, designed for no-compromise, full-on heavy rock.

Short story: EVH went elsewhere in 2004, so Peavey evolved the 5150 amps into what we now know as the 6505 range the following year. They remain hugely popular among the hard rock and metal fraternity, thanks in no small part - in the 6505+'s case - to the seemingly endless gain you can squeeze from the six 12AX7 valves in the preamp.

This new variant offers an alternative on that theme via a quartet of EL34 power valves instead of the 6505's 6L6es. EL34s are what you'd associate with the tighter bottom-end, crunching midrange, British-derived rock tones of Marshall fame. Be assured, though - this is no Marshall clone.

Now, Peavey describes the 6534+ as a metal amp primarily, but as the company's product development general manager Fred Poole tells us, the clean side has been re-evaluated, too.

"The idea for the 6534+ really came from a mod that was popular with some of the engineers that work here. It was the most popular after-market 6505+ modification too, so we just decided to offer it to our customers right out of the gate," he says.

"The mod, which is only applicable to the rhythm channel, allows that channel to clean up a little better as it has less 'grit' at more substantial preamp volumes. The mod also increases the rhythm channel's low end."

The 6534+ front panel is the same as the 6505+: two channels, each with independent three-band EQs plus pre and post (master volume and gain) controls. In addition, each channel features separate resonance and presence pots and the rhythm channel also boasts its own bright switch.

Peavey has included the standard heavy-duty 6505 three-way footswitch, which as well as being used as a channel selector can also switch in the effects loop and the rhythm channel's crunch function.

The collection of preamp 12AX7s are distributed as follows: one for the rhythm channel and a trio with which to heat up the lead channel, with one dedicated to driving the mono effects loop and the sixth as the phase splitter.

Rectification is solid-state rather than valve, which generally means quicker, more efficient power delivery for maximum clarity and attack at higher volumes. Poole remains unequivocal in this choice: "the only way to go with a metal amp in my opinion."

We begin with the rhythm channel and dial in a sparkly clean tone by setting the pre pot to three and the post just past six. Keeping the bright switch out, you can still use the presence to add or reduce cutting zing to both humbuckers and singlecoils.

The tone begins to show signs of break-up when the pre is turned higher than four, but there's plenty of headroom on offer from the post pot - exactly as we'd hope from a 120-watt amp.

The blooming low end of the 6505+ is curtailed a little here, though the resonance pot can add in more weight and indeed a feeling of bottom-end 'space' should you want it, as you turn it clockwise.

Stepping on the crunch button we're almost knocked sideways by the kick. Some compromise is required to get the best from both modes but by setting the pre pot just about flat out, clean mode gives a nicely full yet subdued Cream-flavoured blues sound, while crunch delivers all-out classic rock.

The bright switch adds cut and zing across the two choices which can enliven darker sounding guitars, and help you come through the mix. The amp cleans up well off the guitar's volume pot too, but if you're buying this amp just for its cleany-crunch tones, you're kind of missing the point. Time to roar…

We knew exactly what to expect from the lead channel, and it's good to hear that customary crushing gain structure of which Peavey should be justifiably proud. Lower levels return a dynamic, aggressive edge to notes, but as you increase the volume it does feel subtly more squashy than the 6505+ in terms of playing dynamics.

Thinking about pickup types, we'd say that guitars loaded with active pickups get you closest to the precise, hard modern metal sound with the 6534+. The bridge position Seymour Duncan JB in our ESP GL-56, meanwhile, sounds more old-school hard rock/ metal, even more so when going to vintage PAFs in a Les Paul.

In short, the crushing gain of the amp doesn't completely mask the source instrument. At the upper reaches of the gain levels, the resonance and presence pots come into their own. The former adds some low-end girth and transforms down-tuned chugs into utter slabs of molten tone, while the latter ensures that proceedings don't become overly muffled and indistinct.

Making an EL34-powered variant on the 6505+ theme makes perfect sense - some people just prefer the sound and feel of 34s over 6L6es. In the real world of the audience, those differences may well be all but undetectable, but under your fingers and on the end of your pickups it's a different story.

In that respect, if you've tried a 6505+ but want it, well, slightly more Marshally, definitely give this a go. Similarly, if the other noisy Herbert in your band has a 6505+ and you want something similar but complementing - rather than competing - again it's well worth a look.

The 6534+ is priced higher than a 6505+ and with a new 412 cab pushing the final cost of a half-stack configuration to well over £2,000, this is a serious, professional-minded purchase.

Professional they are, however, and that's why you see the 6505+ on the end of countless hard rock and metal players and indeed in the studio with the genre's top producers - a versatile amp that's perfectly suited to metal.

Be ready to work with the amp to mould the three basic switching options into a package that suits your own style and requirements, but once you have your settings dialled in, you really won't be wanting for any more gain, slam or punch. This is rock unbridled, folks - go to it.