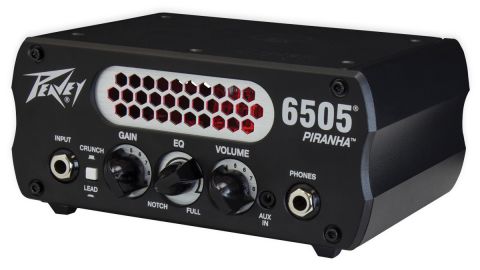 If gain, gain and more gain is what you crave, then the Piranha certainly doesn't disappoint.

The Peavey 6505 Piranha micro-head was introduced at this year's Winter NAMM show, and is one of those products that has instant 'I want' appeal.

This is thanks to its good looks, clever design and minuscule dimensions, which mean you can practically carry it in your pocket.

It's taken a while for the Piranha to swim across the pond, but it's here, at last, and ready to assault ears.

Despite its small size, the Piranha is a proper amp, with a preamp stage that crucially includes a 12AX7 valve, fed into a powerful solid-state 20-watt output stage. We like the pressed steel case with its honeycomb ventilation slots and funky black-on-black graphics, almost as much as we like the LEDs that bathe everything in a red glow at power-on.

The Piranha's front panel gets straight down to business with a single input jack, crunch/lead mode switch and gain, EQ and volume knobs.

There's an aux input jack and another for headphones, while on the rear panel you'll find a series effects loop and a single speaker jack that can produce 20 watts into a minimum load of four ohms. There's also a power switch and a jack for an external laptop-style power adaptor.

The Piranha fires up with a proper rock 'n' roll thump; there's very little hum but some players might find the hiss level a bit on the high side for home or recording use.

For gig use, it's no problem. The Piranha's crunch and lead modes cover a wide range of drive effects, ranging from a decent classic rock bark, to a modern metal sound that's unmistakably 6505, and not that far away from its bigger brothers.

The clever EQ control works as a variable mid-boost/cut, giving you a great scoop tone fully anti-clockwise, or a vicious grunt at the other extreme, with a lot of variation in between.

Clean sound lovers should look elsewhere, though, since the Piranha isn't really about subtlety and nuance.

The inclusion of a proper effects loop adds quite a bit of extra versatility - for instance, you can stick a chorus and delay in there to open up the sound. And although the Piranha works okay with pedals, there's so much gain, your overdrives are probably going to be surplus to requirements.

There's plenty of volume, too, and when we pair the head with a Vintage 30-loaded 2x12 cab, it's more than enough to cope with a small gig.

There's no doubt that the Piranha is mostly aimed at metalheads, but the lower gain levels are worth exploring, as there are some good 70s and 80s classic rock tones to be found here as well.

Set against its biggest competitor, Orange's Micro Dark head, the Piranha comes off fairly well sonically, but it is quite a bit more expensive, and the noise levels mean it's not as useful at low volumes as the bijou Orange.

One thing there is plenty of is the Piranha's killer 6505 metal tone, which sounds equally great with humbuckers or single coils.