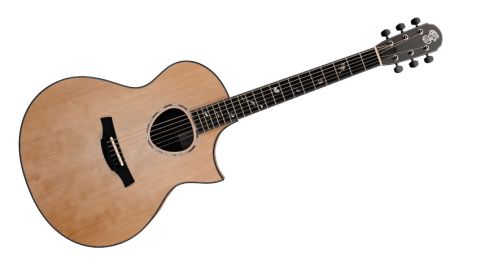 Informed by tradition but not defined by it, the Saluda Florentine is a shining example of contemporary acoustic guitar making at its best.

Patrick James Eggle's acoustics have been praised highly by Guitarist ever since he returned to the UK from the US in 2005. A great example of the modern low-output guitar-maker's craft, he favours tradition where appropriate, and embraces technology when it makes more sense.

This Saluda Florentine's subtly non-traditional outward looks hint at some differences on the inside, too. "This one has quite a few things on it," says Eggle from his Oswestry workshop. "The old Saluda Cutaway isn't scrapped, but we're now able to do more things, and we're showcasing those on this guitar."

The main visual departure from Eggle's existing SC model is the Florentine (pointed) cutaway. "The Florentine is slightly more complex to build, because there are a few more steps. You've got to cut that side and do it in two separate bending operations, then once it's glued together, you've got the extra binding detail to do."

You have to admit it is visually stunning. The old-stock Sitka spruce top is over 30 years old, according to Eggle, with a honeyed colour, a not-dead- straight grain pattern and some subtle bear-claw-type marks.

"No, not at all," explains Eggle. "The soundhole shape doesn't affect the sound in any way, other than it also enables us to slightly forward-shift the bracing, which you wouldn't be able to do if it was round. We'd already built a guitar with a pinless bridge, so that's here, too."

Eggle explains that, without a pinless bridge and its associated hardwood strengthening plate beneath the top, he was also able to experiment with a different bracing pattern that draws partially from the classical fan-bracing method.

It's set obliquely off the bridge (not symmetrically, as you might expect) and enables certain traverse braces to run longer, which he says improves sustain and adds bottom end.

The back and sides are solid bocote, a South American rosewood Eggle liked instantly for its aesthetic. It's a heavily striped, figured timber, almost walnut-like in colour. Finished in beautifully flat nitrocellulose lacquer, it's just one part of an impeccably finished and decorated instrument.

Eggle has chosen a multi- piece design for the neck. Two pieces of Honduran mahogany flank a 3mm centre strip of ebony, with contrasting strips of maple and rosewood. It seems that more European builders go for multi-piece necks - mainly for stability - and it looks impressive, too.

The whole of the heel is included in the neck's construction, but the headstock is not. Its ebony- faced shape hints very gently at Art Deco, which fits with the ostentation of the Florentine cutaway, immaculate purfling and unusual 1mm pinstripe white mother-of-pearl inlays in the ebony fingerboard's side.

Whether you like this kind of marquetry - not least the stunning black and gold mother-of-pearl 'falling leaf' fingerboard inlays - is all down to personal taste. Regardless, Eggle can execute the tricky stuff with enviable skill.

Of more structural interest is the true diamond-join headstock. Eggle explains that the volute you'd see on a traditional Martin-style headstock has its origins in the 'arrow join' used here.

"This enables you to have the grain running in line with the headstock, rather than cutting across at a weird angle," he says.

"It also enables us to be more rigid in our timber selection, because the piece we use for the neck doesn't have to be as big, and it's easier to cut it exactly quarter-sawn from the block; same with the headstock."

Shape-wise, Eggle has gone for a wide and round profile that - and maybe this is triggered by the multi-piece neck - reminds us of a Lowden or two we've played. It feels more Gibson than Martin if you want big generalisations, but more specific would be to say that the 20.8mm (0.82-inch) depth at the 1st fret, with not too much shoulder in the profile, puts enough neck in your palm, and gives your thumb enough purchase, for a multitude of styles.

The 44.5mm (1.75-inch) nut width and appropriate string spacing give you enough room for fingerstyle, but not too much to make strumming a chore.

Eggle's frets are always a meticulously crowned, ended and polished pleasure, in this case using a slightly wider than acoustic-normal (2.3mm/0.09- inch) EVO Gold alloy, made by Jescar.

It's claimed to be harder than nickel silver so lasts longer, but not as hard as stainless steel, which is a pain to work with. It's also hypo-allergenic, with no nickel content: nickel allergy sufferers take note.

To finish up, both the nut and saddle are bone, the latter an unusually wide design that drops in to the pinless ebony bridge, so you can swap it out for one intonated specifically for different string gauges, should you so desire.

Modern, lively and bright will be your first impression of this Saluda Florentine. It doesn't have that immediate midrange kick and warmth of similarly spec'd and sized Martin; it's more contemporary sounding, with a strong sense of presence to the top strings in particular, and a deep, resonant bottom end.

It's hard to say what is defining the guitar's overall timbre - obviously, it's a combination of everything - but what we know about pinless bridges and laminated necks in other guitars makes sense in this context.

Strummed hard, it can exhibit a brash nature, but we'd assume (and, indeed, hope) you're not dropping £4k on a cutaway acoustic just to hammer it with a plectrum. No, where this guitar sings most sweetly is when picked, be that for traditional or more contemporary fingerstyle.

Compared directly with more conventionally braced Martin OM-21 and Taylor 714ce guitars we had to hand (both just months old), the Eggle more than stands up for itself in the volume stakes. It's closer to the Taylor tonally, but we think the Saluda Florentine is more mid-Atlantic sounding than either of the two stoically American big boys.

A slightly heavier set of strings (it came supplied with and set up for 0.011s) will drive the top a bit harder no doubt, but even so, it's a sweet, sweet voice that draws you ever further in to explore its considerable dynamic and tonal range.

This guitar proves once again that Patrick James Eggle stands shoulder to shoulder with the best acoustic makers. That's more significant than it sounds, because there are plenty who merely stand on those shoulders.

If you want a traditionally styled, established American-brand guitar, Mr Eggle is unlikely to tempt you to his fold. As far as we can see, however, that's only good news for the rest of you who really do want something different and unique. Because, with its non-'standard' approaches to aesthetics and design, the Saluda Florentine absolutely warrants its own highly credible, highly desirable place in the world. A breathtaking example of modern acoustic guitar making.