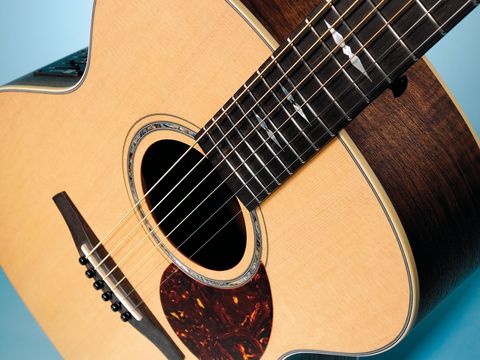 A cracking electro with bags of presence and punch built for a long life on the stage.

Those who have seen him play will agree that Gareth Pearson is a special talent. Fingerstyle pyrotechnics combined with explosive lead runs make Pearson one of the most exciting acoustic musicians gigging today.

It was while supporting Jan Akkerman during his European tour in early 2009 that Pearson first had contact with leading UK luthier, Patrick Eggle. At the time, Pearson was using a Maton guitar, but the two men share a passion for acoustic guitars and quickly began discussing ideas and concepts for what became Pearson's own Linville model. If you haven't heard of Gareth Pearson, check out his amazing fingerstyle arrangement of Michael Jackson's Thriller here.

The overriding design brief from Pearson was somewhat unusual. Gareth required a guitar that gave a flat or neutral acoustic response, thereby giving him far more control when on stage. In essence, the guitar was to be a stage acoustic, being built to perform at its best when plugged-in - even if that meant sacrificing some of the unplugged tone.

The starting point in the project was Eggle's Linville model, an OM-shaped guitar that has proved popular with many due to its rich tonal output. Pearson's own design spec, however, resulted in some significant changes from the standard Linville. Not least of these is the all-over satin finish.

Eggle's guitars are known for their high quality gloss finish, but the Gareth Pearson model is offered with only one base coat and two very thin coats of acrylic. Even pore-filling has been dispensed with and the result is an instrument with an extremely natural, earthy feel.

As with all PJE Linvilles, the soundboard is Alaskan Sitka spruce, known for its straight grain and inherent elasticity, and therefore excellent response. The back and sides are a gorgeous selection of black walnut, which is considered to be a more acoustically transparent tonewood than mahogany or maple - a clever choice here when considering the end goal of a guitar with a less coloured, flatter response.

The black walnut used for the back is figured and expertly bookmatched, creating the illusion of a contrasting centre strip. Only a naturally occurring variation in the grain gives the game away. Inspection of the back and sides reveals the extent of the 'earthy' finish. Pores are clearly visible, as is every nuance of the grain. Lovers of wood, step this way.

White ivoroid binding is fitted to both sides of the body, while the top includes a tasteful black triple-line purfling. The ultra-slim, one-piece mahogany neck is attached using two bolts and a simple but strong mortise and tenon joint, while the headstock is faced with an attractive piece of ebony with the white mother-of-pearl-inlaid PJE logo.

Interestingly, Eggle's selection for the headstock face features a contrasting figure, which adds to the natural, earthy vibe. Black-coloured phenolic resin buttons are fitted to the chrome, PJE-branded Gotoh 301 18:1 ratio tuners, which prove smooth and stable.

Of particular note is the set-up of this guitar. The action is extremely low and the resulting fret slap from each note gives a bright, percussive edge to the sound. When added to the slim, satin-finished neck, speedy chord work and solos are a breeze. In fact, it sometimes feels as if the guitar is encouraging you to play faster!

Decorative features of this model include the (yet to be officially named) overlapping double diamond fretboard inlays, crafted from black and white mother-of-pearl (which are an upgrade to the standard model), abalone discs sat atop the bridge pins, as well as an abalone soundhole rosette.

As we've come to expect from Patrick James Eggle Guitars, the overall standard of build quality, finish and presentation is of the highest order. The guitar feels strong enough to handle the rigours of touring, yet light enough to not make touring a rigour.

As you'd expect from a guitar designed principally for the stage, the onboard electronics are crucial. Add into the mix Pearson's unique playing style and the search for something suitable for this guitar began. Eggle admits to having 'been around the houses' in the search, but in the AER AK30 Plus (a piezo/mic blend system), both Pearson and Eggle feel they have the best the world of pickups can currently offer.

The AK30's aluminium control panel is mounted on the upper side of the lower bout, just below the waist. Installation is simple. The unit screws into itself, creating a wood sandwich, which is good news for anyone considering a retro-fit. In a canny touch from AER, the AK30 is phantom powered when plugged into any AER amp.

The control panel itself is fitted with sliders for bass, treble (which are centre-indented), volume and blend control. The unit is simple, uncluttered and ideal for dimly lit stages.

In view of the design brief, it seems superfluous to comment on the guitar's acoustic performance. However, we'd say that the overall acoustic timbre is mid-biased, with a crisp, punchy tone that, while not being the most colourful, is sharp and bright.

Of real interest though is the way this Linville performs when plugged in. With the AK30's EQ set flat, we plugged in to our house Schertler David acoustic amp with its three-band EQ also set flat. From the off, the Linville leaps into life disgorging a powerful, zingy, upper-mid-range-biased rasp that clears the mind in the same way a cold shower first thing in the morning would.

The overall presence of the commanding tone is what's particularly striking. Every attention-arresting note sings out with a front-end slap and absolute clarity, so much so that you'd better sharpen up your playing, because this guitar picks up everything - there's nowhere to hide!

The AER AK30 Plus performs extremely well indeed and even at high volumes there's no apparent background hiss. Rolling the blend towards the mic and taking the edge off the treble takes away some of the crispness in favour of a marginally softer output, but in truth, warm and mellow tones aren't really on offer here without the influence of an amplifier. A bright, mid-driven punch is where it's at and we love it.

£1900 is a lot of anyone's money and you may be troubled to see our score of five stars for value for money, but consider a few factors. The standard Gareth Pearson model is £300 cheaper than a standard Linville. Also, fitting the same AER pickup system set on a standard Linville would add an extra £400-£500 to the price.

That puts the 'dry' Gareth Pearson model at around £1,300, which is phenomenal value, so five it is. Having seen Gareth Pearson play, we can understand where this guitar is coming from. His lightning fast, intricate fingerstyle playing demands a specific type of tone and by adapting his standard Linville model, Patrick Eggle has captured the essence of the player and the required sound.

This guitar is a fantastic stage guitar and it needs to be out there and used. If you're a busy acoustic gigging player looking for a little more 'blast' than your current instrument offers, we'd suggest the Linville Gareth Pearson is an absolute must-try.