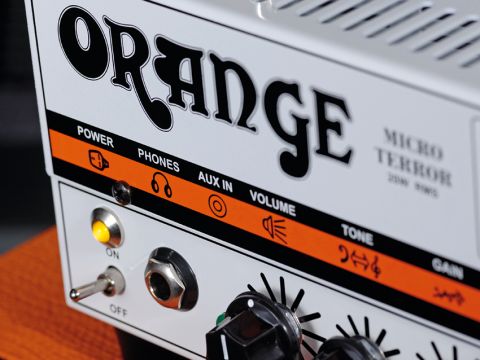 For just £99, this is impossible for us to not recommend.

You have to hand it to Orange: if imitation is the sincerest form of flattery then the British amplifier company must feel justifiably smug about the way that the huge success of its Tiny Terror amp triggered a practically industry-wide lunchbox amp craze.

Time to kick back, relax and watch the cash roll in, then? Don't bet on it.

Hot on the heels of such additions to the range as the none-more-metal Dark Terror and the Terror Bass heads comes a pair of new models: the Signature #4 Jim Root unit and Orange's smallest head yet, the impossibly cute Micro Terror.

At just 16.5cm (6.5 inches) wide and weighing in at just 0.85kg (1.87lb), it would be easy to assume this is a novelty practice amp. However, the unit is not only housed in the same tough high-tensile steel case as its larger brethren, but it can also crank out a cool 20 watts into four ohms thanks to a solid-state Class D power amp.

A single ECC83/12AX7 preamp valve gives the Micro Terror two stages of gain based loosely on the voicing of the front end of the original Tiny Terror head. A 1/4-inch jack headphone output and 1/8-inch jack auxiliary input are useful additions for home practising, but don't be fooled into thinking that the diminutive Micro Terror couldn't be a serious option for live performance.

Orange's specially-designed eight-inch speaker-loaded PPC108 cabinets (£59 each)
can be used in conjunction with the Micro Terror for cute mini-stack bedroom or studio thrills, but for the stage you'll likely require something somewhat beefier as far as cabs are concerned. The amplifier's four-ohm minimum impedance output will safely drive eight- or 16-ohm cabs, but needs to be matched with a four-ohm load to deliver the full 20 watts.

So can an amplifier this physically small really deliver the kind of juicy crunch upon which Orange built its reputation?

Before we answer that question, it's worth noting that an amp head this light can get very mobile, very quickly, even when equipped with non-slip rubber feet. With little more than a careless tug of your guitar lead, the unit can be dragged off the top of a speaker cabinet or desk.

For live use we'd recommend using tape or Velcro to secure the Micro Terror in place. In addition, although the supplied 15-volt DC mains 'wall wart' adaptor works perfectly, it's not as readily replaceable as a regular kettle lead, so you may want to consider obtaining a backup for regular live use.

Once stationary, with the volume and gain controls working hard, we're struck by how unexpectedly loud this thing is. Fans of classic rock guitar raunch will be in their element as this tiniest of Terrors pumps out a ferocious crunch with no shortage of character.

For fans of Led Zeppelin, AC/DC or even Oasis, there's a whole lot to love here. While the PPC108 cab might seem a little boxy in isolation, for studio recording, it's just the ticket for a Dave Davies-style garage-rock bark, with none of the boomy bottom end that you might usually need to EQ out when mixing.

Through a more substantial cabinet, there's no shortage of low end, and this translates into even bigger versions of the sounds we've already described, opening the door to everything from a rich Keith Richards-style breaking up rhythm chime right through to stoner rock. You might struggle to get pristine cleans out of the Micro Terror, however: it really does like to rock.

Despite its incredibly compact size, this is an amp that's most at home on stage or in a soundproof studio. It just sounds better with the volume working harder and the headphone output is a little harsh for sustained solo practice sessions.

At £99, it's hard to bet against the Micro Terror being another winner for Orange. For less than the price of a decent overdrive pedal, you get a physically small but sonically huge amplifier with more than enough power for the kind of gigs that most of us are confronted with. If a single channel doesn't provide enough flexibility for you, it's still hard not to recommend; it's tough to think of a better and more compact back-up for your regular gigging amp.