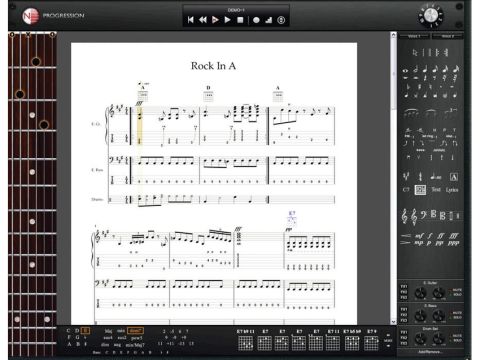 Progression is an accessible tab-based music package. As long as you're not expecting advanced engraving functions, it's a solid buy.

Notating guitar music is a pain. Even without the instrument's unique articulations - slides, bends and whammy bar dives, etc - each note can be played in up to five different places on the fretboard.

This makes the guitar a great deal more difficult to notate for and emulate in the digital domain than, say, the piano (which is essentially a tuned percussion instrument). With Progression, Notion has tried to make life easier for guitarists who want to notate and produce convincing audio of their song ideas.

There are already a fair few guitar notation programs out there, but it's fair to say that they tend to fall down where audio reproduction of your piece is concerned. So, Notion has made sound quality one of Progression's strengths.

A cadre of top-flight session players - including guitarist Neil Zaza and rhythm section gurus Victor and Roy Wooten (bass and drums, respectively) - has been roped in to painstakingly record the 1.5GB of samples, which every note of the guitar's fretboard. The effort has paid off because the samples are very good, providing some of the most realistic guitar sounds of any notation program on the market.

They're by no means perfect, though: bends are still robotic and short notes suffer from the dreaded 'sampled note decay'. But unless we're willing to install a 2000GB sample library, what can we reasonably expect?

As well as guitar (in both electric and acoustic varieties), there are electric and upright basses, a drum kit, and even piano, clavinet and Fender Rhodes keyboards.

The guitarist-friendly setup is enhanced by the inclusion of a mixer section, which enables balancing of the instruments as well as the ability to add VST effects to the supplied unprocessed guitar sounds. There's also the NTempo feature, which enables you to control the speed of playback in real time by tapping the computer keyboard or any MIDI key.

This is useful for adding a human feel to your music, or when you're playing along (eg, by tapping out the beat on a MIDI foot pedal) to your backing track. It also enables the use of Progression in a live performance scenario.

Notion has tried to make the process of note entry as easy as possible for guitarists. You can directly enter notation or tab using either the mouse and keys or with a MIDI keyboard or MIDI guitar (though string bending isn't currently translated).

The great thing about the note entry is that notation automatically generates tab and vice versa, which saves on having to drag the notes from one stave to another. This function also means that a note that needs to be edited later will be automatically changed (in some apps, the whole bar has to be re-entered).

It's a simple solution that doesn't exist in many other programs.

Chord entry is as easy as clicking in the appropriate place on the score and selecting the shape you want from Progression's library. The guitar neck graphic that runs down the left-hand side of the screen comes into play when you edit the notes within the chord shape - you simply click on the fret you want a note to appear in and the alteration to the diagram is made automatically. You do have to rename the chord yourself, but that's easy enough.

On the surface, it looks as if Notion have got guitar notation nailed, but we do have a few gripes about the engraving side of Progression. Engraving is the process of laying out the score and its various elements in an aesthetically pleasing and musically comprehensible manner, but unlike programs such as Finale, there isn't the ability to get into every aspect of the layout of the piece, meaning big compromises have to be made.

To give you an example, note spacing is automatic, meaning that some bars can end up looking like a fight in a telephone directory, and if you try to place too many chords in a bar, the chord diagrams overlap and become unreadable.

These two problems can be sorted by specifying a maximum number of bars per system (musical line), but this is a global setting and can make the rest of the piece too spread out and difficult to read.

Progression is also missing quite a few key musical symbols. Things like being able to specify the number of repeats, first and second time endings and codas, to name but a few, should really be considered essential inclusions in any notation program.

All that said, it is worth remembering that Progression costs just £80, and if you're a guitarist who has only a basic knowledge of music theory and just wants to get some ideas down, this represents excellent value for money.

Progression is also a great piece of software for the guitarist who's looking to map out their song arrangements for band members to listen to and follow, or for someone who simply wants to create a few backing tracks to jam along with.

Take a listen to a Progression-produced track: