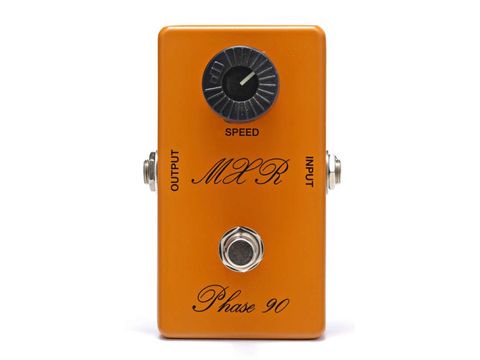 A classic vintage stompbox re-issued in as close to the original form as possible.

Since its introduction in early seventies, the MXR Phase 90 has always been regarded as one of the classics and there are current reissues in various forms by the present Jim Dunlop-owned brand.

This Vintage 1974 model is a custom shop job and ought to satisfy demand from purists seeking an unadulterated clone of the very first version - the one with the script logo produced from 1974 to 1977.

What the company did was to basically reverse engineer an original pedal that had been purchased in 1974 by Bob Cedro, a Dunlop engineer.

The result is a hand-wired circuit board with original specification 1974 components, including select resistors paired with hand-matched FETs that aim to exactly recreate the original sound.

The pedal is finished in a similar dull orange shade as a vintage pedal, printed with the MXR script logo and featuring high quality Switchcraft input and output jacks as well as a Carling bypass switch.

No modern tweaks have been added which means no status LED and battery power only - accessed by removing four screws and taking the pedal's base off.

Inside, the circuitry is protected and separated from the PP3 battery by a layer of foam - something that has inevitably deteriorated in most vintage units.

The only control available is a single speed knob that comes with a removable rubber cap for easier adjustment by foot.

Eddie Van Halen apparently liked the treble boost quality of his Phase 90 for solos, and a slight tonal shift in that direction as part of the effect is apparent when kicking the pedal in, but it's the silky quality of the phasing that is the real deal here.

From the slowly shifting tonality at one extreme to the fast bubbling at the other, this is organic phasing that seems an integral part of the guitar sound rather than something slapped on top of it.

The original Phase 90 always had a mellow quality that just worked with guitar and this reissue is the same.

In an A/B test with our own original vintage 1974 model the sound wasn't identical - there was a slightly different tonality - but not so much that we could say that one sounded better than the other, which means that MXR has achieved its aim.

If you want that mid-seventies Phase 90 sound this reissue is as close as you'll get to it without trawling Ebay for a battered original.

As a basic tremolo the MXR does the job just fine but really comes into its own in stereo with a truly spacious sound.