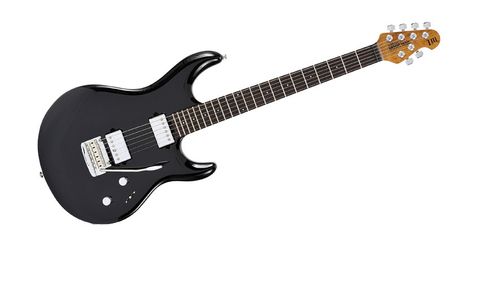 A more 'vintage' version of the original, it's a beautifully made, gig-ready pro, ideal for modern rock and more.

Music Man is probably best known for its classic StingRay bass, but its six-string electric line dates back to 1985 with the Silhouette, which remains one of the most intelligent and thorough redesigns of the Stratocaster.

Since that time, of course, many guitar legends have played and endorsed the brand, and its signature artists have included Eddie Van Halen, Steve Morse, Albert Lee and, as here, Steve Lukather. The latter adds a new signature, the Luke III, released in 2013, which joins the original Luke model and the Ball Family Reserve (BFR) versions.

Lukather's latest electric vision is sleek, modern and minimalistic. The alder body with its rounded lower bouts and exaggerated offset horns retains Fender-like contouring with enhanced top edge chamfering. The black gloss poly finish is perfect and an ideal base to set off the chrome hardware.

A rounded and chamfered-edge heel holds the neck with five screws and no hint of sideways movement; top fret access is easy and comfortable. The strapped on feel is familiar - there's no different 'hang' to get used to.

Music Man's trademark 'four-and-two' headstock results in a more compact - some would say stumpy - mini Fender design, but it does reduce the overall length of the guitar compared to a Strat. Certainly, the Schaller locking tuners add to the feeling of weight, but functionally they're superb.

A Music Man compensated nut aims to fix the tuning issues in lower fret positions and, as we've often said, the mark of a good pro guitar is how it not only plays in tune but stays in tune. This is a perfect example.

Made from a deep brown coloured 'roasted' birdseye maple, the neck actually feels a little delicate in terms of width and its slightly V'd profile. If you think all 'modern rock' guitars have huge frets, well, not here - there's plenty of width but a relatively low profile that actually gives a rather vintage-like feel, especially with that neck profile.

There are few modern vibratos that don't start with the Fender blueprint, but the two-post Music Man design here has pressed steel saddles, a push-fit stainless steel arm and, as set, sits flat with no up-bend. Tuning stability is superb.

Both DiMarzio Transition humbuckers in classic-looking chromed covers screw directly to the body. These pickups were designed specifically for Lukather and this guitar, their name coming from Lukather's 2013 solo release - a great place to hear this guitar in action.

They're controlled by a chrome-tipped five-way lever switch that in positions one, three and five offers standard bridge, both, and neck selections. Position two selects the outer coil of each humbucker in a parallel mix; position four selects the inner coils of each 'bucker, again in parallel.

Finally, via a push/push switch on the volume control we get an active gain boost in up position. Inside the rear cavity there's a trim pot to set its level (factory set at +12dB, with a maximum of +18dB boost), and also, in active mode, a trim pot to adjust the level of positions two and four. It's a hugely gig-ready guitar.

Acoustically, there's a zingy ring to the Luke that's instantly very Fender-y; it's a lively guitar. These are pokey humbuckers, too, with quite a mid-push and plugging in after a standard Fender Strat you really appreciate the way it fries the front end of your amp into a very rock-focused crunch. But, by design, it's far from a one-trick pony.

Back the volume control down and select position two or four on the five-way and there are a two modern Fender-like mixes almost pre-EQ'd to sound pristine and clean. Introduce a touch of modulation and reverb and the guitar really begins to show its potential.

While it might well be at home with modern processors such as the Axe-Fx, it actually works effortlessly straight into a valve amp, and this is where that gain boost comes into its own to leap from those cleaner, tight and punchy chordal or rhythm voices to a really expressive, focused lead tone.

The tone control can certainly wind down the crisp highs for a cocked wah 'woman' tone, but to be fair the highs really aren't over done: they sit nicely with the midrange thump and punch. Does your sonic heart lie in the 80s rather than the 50s or 60s? Then here's a tool that could be priceless to you.

This is a superb modern electric guitar - in this case designed to work for a top guitar player. The Luke III is almost vintage in its neck feel, and its secret weapon gain boost and versatile pickups mean that it'd be superb on any rock gig, not to mention jam session.