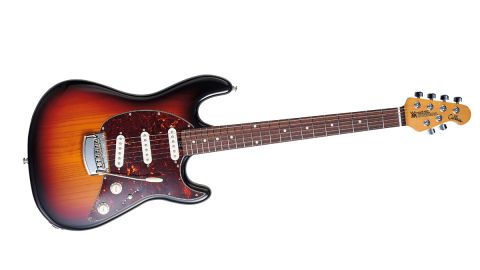 Modern? Yes. Classic? They deserve to be. Place your orders now!

Heaped in the Californian tradition of original company founder Leo Fender, this new-for-2016 model returns to that great man's heritage.

The Cutlass certainly returns to Fender's finest moment and is apparently based on a never-released prototype.

Like John Page's Classic Ashburn, the Cutlass reinterprets the Stratocaster with a slew of updates - a vintage-spec Strat clone, it's not. While the shape is a close cousin and the overall length is virtually identical, the geometry is subtly altered.

Using the 12th fret as the common marker, the Cutlass's body sits lower giving more room for the upper frets and subtly altering the familiar strapped-on balance. We have the usual comfort contours, although the forearm chamfer is small and less extreme, while the rib-cage cut seems less dished and, oddly, there's a slight ridge before a flat point on the treble-side edge by the output jack.

The jack plate actually sits on that ridge and therefore isn't totally flush with the body, whereas if it were moved down a little, it would sit more comfortably. We suspect this is a prototype issue.

The side-mounted jack does, however, remove one of the Strat's most visual hooks - its dished output jack - and although the guitar retains the classic single coils, we also have a more contemporary master-tone-and-volume control layout.

Of course, the Music Man '4-and-2' turner layout on the hallmark head really gives the game away - no-one is going to think you're playing a Fender! However, the headstock is slightly enlarged and body sizes are bigger and more regular, too.

The vibrato backplate has elongated holes to easily pop in new strings and to its side is a flip-top battery compartment for a nine-volt battery to power the new "wide spectrum Music Man 'Silent Circuit', which reduces hum and retains true single coil sound", so says Music Man, and also a "transparent buffered output for complete tonal consistency at all volume levels".

Options are limited to either a maple or rosewood fingerboard (as here) and these are colour co-ordinated, too. So, for example, if you wanted our Vintage Sunburst Cutlass with a maple neck, you couldn't have it. And speaking of necks, there's no gun-stock oiled finish here: instead, we have a more regular, nicely toned satin polyurethane.

We don't quite get that 'wow' factor of the usual oil-finished neck here, but it feels very good with a meaty 'D' profile, approximately 21.4mm deep at the 1st fret and 23.3mm at the 12th.

The Cutlass's neck shape makes the transition point between neck and fingerboard edge feel, but it's nothing to ruin the fun. Frets are perfectly fitted and polished and setup is excellent with a roomy string height that's not overly low.

Unplugged, it has that encouraging clean vibrancy and on the Cutlass that translates to an almost 'produced' tonality after our reference Fender Road Worn Strat. The nature of the sounds is, of course, pure Strat - with plenty of air and bite and a virtually total lack of any hum.

Conversely, though, there's no 'active-ness' and the high end sounds extremely natural. There's plenty of bite that's rounded on more gained sounds by knocking back the tone control and, unless you're a Strat diehard, you'll probably find the single master tone a more straightforward drive.

The 'Modern Classic' moniker is highly accurate. Yes, Music Man might have plundered its back catalogue for inspiration, but this is a superbly built modern guitar that plays like a dream.

The hum-cancelling Silent Circuit and the transparent buffer mean you really won't have a problem with hum or any lack of clarity with long lead runs.