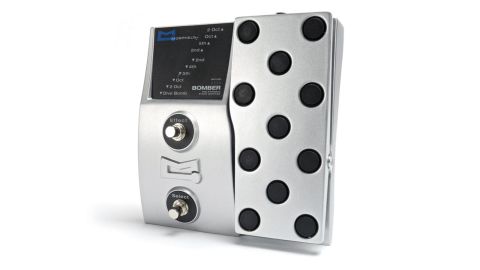 If you don't try to do the revving dragster thing with the Bomber's Dive Bomb setting when you first plug it in, you're taking life too seriously.

Coaxing extreme string dives from a hardtail Telecaster or Les Paul is fantastic. Push the Bomber's treadle all the way down and it sounds as if your strings are lying on the fingerboard like wet spaghetti.

"Choose the two-octaves-up setting for a sound that's probably best described as a helium-doped mouse having an orgasm."

Even once you've exhausted this effect, the Bomber is so easy to navigate that you'll be pulling off other familiar pitch shift sounds in seconds. For instance, the two-octave upshift setting (displayed as 2 Oct) is perfect for Tom Morello-style squeals and The Edge's octave stabs in the intro of U2's Even Better Than The Real Thing.

In addition to the aforementioned Dive Bomb and two-octaves-up effects, five down-shift modes are packed inside that tough steel case: one and two octaves, a fifth, fourth and second. There are also three more up modes: an octave, a second and a fifth.

Going an octave down transforms your guitar into a bass; while an octave up produces a Nashville (or high-strung) tuning vibe for a great 12-string effect when combined with a regular six-string, either on a recording or played by a bandmate (you can't blend the dry and processed sounds).

Speaking of country music, if you hit a note with the Bomber's 2nd Up mode selected, then push the treadle forward to raise its pitch by two semitones, you'll get a pretty convincing pedal steel guitar effect.

Like DigiTech's Whammy DT, the Bomber is polyphonic. This means that you can play more than one note at the same time and it won't sound weird.

Lower the pitch of the strings with the foot treadle and all your notes will still be in tune with each other. That's great if you decide to dump the pitch to play heavy bottom-string riffs or fat-sounding chords.

It doesn't just have to be about wild bends either: choose the two-octaves-up setting for a sound that's probably best described as a helium-doped mouse having an orgasm. Run it through a phaser or rotating speaker effect, chop out some chords and doublestops, and it mutates into a brilliantly squeaky 60s organ sound.

Add the 'mouse organ' to the fake bass and 12-string sounds, and the Bomber reveals itself to be a versatile pedal. Of course, the DigiTech Whammy DT can do all those tricks too.

If you are looking for a gig-proof, easy-to-use, polyphonic pitchshifter pedal, the Morpheus Bomber certainly fits the bill. But wait - with the Whammy DT already selling for as little as £235 online, we reckon dealers will have to sweeten the Bomber's price tag to tempt you away from the spec sheet, brand heritage and pricing of the DigiTech pedal.