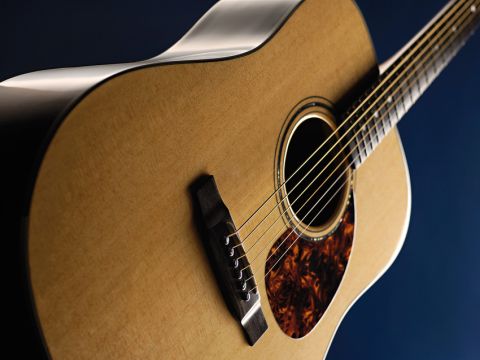 A beautifully-presented acoustic for the discerning flatpicker who appreciates and values high-quality materials, construction and tone.

The unlikely setting of a small workshop beside the Bay Horse Pub in Glasgow's Pollokshaw's Road serves as the home of one of the UK guitar industry's best-kept secrets.

Jimmy Moon of Moon Guitars has been building a fascinating array of both electric and acoustic instruments - including mandolins, dulcimers, bespoke multi-string hybrids and 'regular' six-string acoustics - since 1969, when the first Moon issued from a small workshop on the Island of Arran off the west coast of Scotland.

Moon Guitars celebrates its 30th anniversary in 2009 and all models produced this year will carry a commemorative label in recognition of this. Notwithstanding its humble roots, Moon has built and repaired guitars for some of rock and pop's most popular names, including Franz Ferdinand, Del Amitri and one of folk's elder statesmen, Dougie MacLean.

In the case of the former, the story goes that the guitarist in Mr Adams' support act was using a Moon onstage and, being so impressed with its sound, Adams promptly tried to purchase it out of his hands. The guitarist in question declined and politely suggested that Mr Adams should get his own. So he did.

Moon's compact range of guitars falls into one of two series - the Standard series and the Master series. The RD3 issues from the Standard series and was first launched some five years ago. However, over the years the RD3 has undergone a degree of development and refinement that has resulted in the model presented here for review.

Check it out in action in the following audio demo:

Aimed squarely at strummers and flatpickers who appreciate fine materials and workmanship, our review model comes 'dry' - without any electrics. That said, Moon will fit any pickup system desired by a customer, although it recommends Fishman.

Whichever way you view it, the RD3 is an extremely good looking guitar. If it were hanging amid a wall of dreadnoughts, this reviewer would reach for the RD3 first. Right out of the case, two things immediately grab our attention.

First, the high quality selections of Indian rosewood used for the back and sides, which are deliciously rich and full of black grain - the finest we've seen for some time. Second, the almost polished, glossy appearance of the ebony fingerboard is undeniably alluring. It draws you in and demands to be played.

Some acoustics are real eye-candy, others you can't wait to get your hands on. The RD3 somehow manages to be both. The bookmatched soundboard is made from Canadian AAA Sitka spruce and presents a strong, tight grain.

Atop the soundboard sits an ebony bridge housing the six black pins graced with abalone heads and a flawlessly fitted, bevel-edged tortoiseshell pickguard. We particularly like the triple-ring, abalone soundhole rosette.

On a smaller-bodied guitar, this level of decoration might be a little overpowering, but not so with the ample proportions of this dreadnought. When matched to the pickguard and double pinstripe black purfling, the RD3 boasts a classy but contemporary appearance.

Both sides of the RD3's body are beautifully bound and the two pieces of the guitar's back are divided by an ultra-thin white purfling-like stripe crafted from the same material as the binding - a delicate and tasteful touch.

The one-piece mahogany neck runs up behind the headstock, to which an ebony high-gloss facia is affixed. The headplate, in turn, has the Moon logos expertly inlaid. Chrome Grover 102s are tuners of choice; they hold pitch, but are a little slow to respond at times. How about a Waverly option?

The sumptuous ebony 'board is inlaid with mid-sized pearl fret markers. In terms of dimensions the RD3 is almost identical to a Martin D-18, although the Moon has just a couple of extra millimetres across the lower bout. The RD3's string spacing is identical too and is obviously set with strumming duties in mind.

Our Moon review model benefits from a particularly good set-up. With its slim profile 'D'-shaped neck and ultra-low action the RD3 is a joy to play; slick, fast and effortless.

There's no question that Moon's 30 years of experience has taught the company how to build, finish and present a guitar superbly. Every joint is super-snug, the frets are dressed faultlessly and everything about its appearance speaks of its quality.

Indeed, we'd suggest that Moon's craftsmanship would comfortably sit next to that of Collings, Huss & Dalton and Northwood. What's more, to protect this quality piece, it comes with a Hiscox LiteFlight Standard hard case.

With a medium pick in hand, strumming first position chords with not a little gusto, the RD3 sings out brightly and with bags of upper mids and treble. Tonally speaking, the RD3's output is more akin to the lively, crisp tone that has come to be associated with Taylors.

Along with its strident, brisk voice, the RD3 also packs a powerful punch, offering plenty of volume. Where the Moon particularly impresses, however, is in its ability to underpin all that volume and brightness with a measure of warmth and character.

Played against our house D-18, the Martin certainly has more warmth, but the RD3 couldn't be described as lacking. In years to come, as the quality tonewoods mellow and with regular playing, we'd suggest that this RD3 will mature into a particularly competent and capable dreadnought that's well-suited to a range of disciplines, but excelling in accompanying vocals.

The RD3 is a great guitar and all the indications are it will only get better with time. Top-drawer build quality, near perfect finish and a bright, punchy tone will surely prove to be popular with many.

All things taken into account, it's fair to say that £1,750 is a great price for this model. In fact, we think you'd be a lunar-tic not to go and try one.