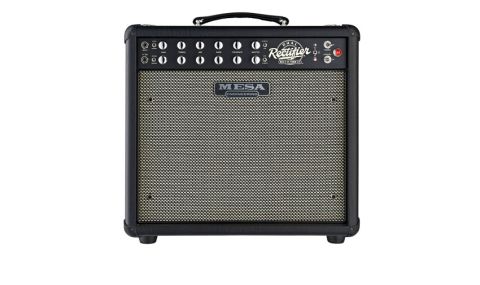 Mesa scores big time with the Recto-Verb Twenty- Five - it's the best small combo the company has made in ages.

While many guitar players know Mesa as the company behind the Dual Rectifier that defined the sound of American metal in the 1990s, there's an earlier generation who remember the excitement caused in the early 1970s by a small combo with an unusual and unforgettable name - the Boogie.

Catapulted onto centre stage in the guitar world, the tiny combo - barely larger than the single 12-inch loudspeaker shoehorned into its exotic hardwood cabinet - had a reputation for making the 100-watt stacks so common back then look and sound rather ordinary. Ever since, the concept of the giant-killing small combo has been Mesa's speciality, and the latest in a long line has just arrived in the UK. Say hello to the Recto-Verb Twenty-Five.

Mesa has an enviable reputation for producing great-looking, beautifully made guitar amplifiers, and the Recto-Verb Twenty- Five is no exception. The almost forensic attention to detail that goes into every Mesa product is self-evident everywhere you look. The CNC joinery is super clean, while the cream silkscreen work on the front panel is a perfect match for the cream thread in the speaker-grille fabric.

Inside the aluminium chassis, Mesa's electronics have their own unique look, with a particular way of doing things that goes right back to the beginning, combining printed circuit boards with flying leads to the front panel controls for reliability and ease of servicing.

The Recto-Verb Twenty-Five's high quality through-plated main board is CAD- generated, rather than the hand-drawn PCBs used on earlier designs, but still features some typical layout quirks that are part of the fabled 'black magic' in every Mesa amp. The overall result is an amp that looks as good on the inside as it does on the outside, combining stylish design with robust build quality that will stand up to any kind of abuse.

The Recto-Verb is a proper two-channel design, with dual banks of gain, volume and tone controls feeding a grid-biased dual EL84 output stage. Both channels have two voicing presets drawn from the mighty Dual and Triple Rec heads - clean and pushed for the top channel, vintage and modern for the lower overdrive channel.

Additional features include separate high- and low-output wattage presets for both channels and separate reverb level controls on the rear panel, with an optional reverb footswitch jack and a simple series effects loop. Channel switching is taken care of by a small, unpainted alloy footswitch (another nod to the past), or a front panel toggle.

Not all of Mesa's EL84 amps have been amazingly successful. But time has provided the opportunity to refine and revise, and the Recto-Verb Twenty-Five's tones are quite simply stunning. On one side there are treacly sweet Fender-inspired cleans and subtle tweed-flavoured overdrive from the 'clean' and 'pushed' voices.

Then there are the considerably less subtle killer lead sounds from the Rectifier-inspired 'vintage' and 'modern' voices, with harmonic squeals, tons of natural compression in the low-wattage setting, and a savage mid scoop that typifies the aggressive, modern USA metal sound that Mesa basically invented.

The icing on the Recto-Verb Twenty-Five's sonic cake is a superb all-valve transformer- coupled spring reverb that provides anything from subtle ambience to full-on Dick Dale surf wildness. Mesa does spring reverb better than anyone - even the company that first used it - and the Recto-Verb Twenty-Five's effect is probably the best you'll ever hear. The tone controls work smoothly with no nasty peaks, making it easy to dial in any guitar.

The 'big sound from a small box' concept started with the modified Princetons that led to the original Mark 1 Boogies. Today, over four decades later, the Recto-Verb Twenty-Five is proof that nobody can match Mesa when it comes to maximum tone from minimum dimensions.

With plenty of volume to handle most small-to-medium unmic'd gigs and excellent low-end response from a slightly deepened cabinet, the Recto-Verb Twenty- Five can handle just about any guitar demand, from country to blues to metal mayhem.

The price may make you wince, but quality never comes cheap, and for what's on offer here we think this is still very good value for money.