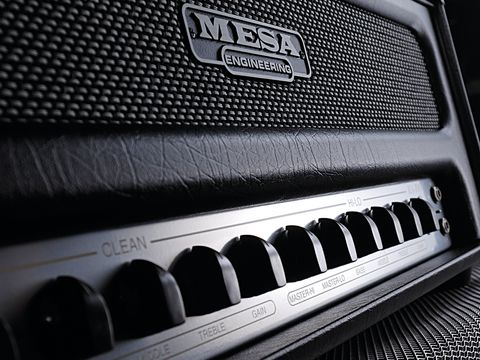 Pedigree in the rock amplifier market doesn't come much purer than Mesa Boogie. A firm fixture of both stage and studio since the late seventies, the brand is one of a tiny handful that has genuinely defined new sounds and continued to evolve throughout its entire history.

To date, that history has been linked strongly with California: Fender-derived circuits for the most part - albeit highly evolved - and a goodly proportion of 6L6 valve power. The company nodded towards Brit-focused, EL34 rock - read Marshall - with the Stiletto series of 2004 and now, via the all-new RA-100, moves a step closer to Blighty in the sound stakes.

The RA's styling and architecture is about stripped-down simplicity; curved panels and a single row of knobs echo the recent Electra-Dyne, all finished to Mesa's impeccable standards.

Wrapping vinyl around all those curves, for example, is fiendishly difficult as are most of the other things we take for granted, not least fastidious internal design, layout and build. It doesn't pop when you change channel; background noise is very low and so on.

This kind of detail and consistency - we've been examining Mesas for over 25 years - is rare. Moreover, if you build amps like this in the USA, paying USA wages and using top quality parts, your amps are never going to be cheap.

That may be important to you, or it may not. Moving on…

The RA-100 has two channels with three modes, all of which are footswitchable. Channel one is clean to light drive, and stays on the American side of the Atlantic, according to Mesa. Channel two is where the 'British' tones start happening, split across two modes; lo and hi, which cover mid-'60s Marshall blues, late-'70s and '80s 'modded' rock and beyond. As for controls, if you get lost on the front panel, maybe it's time to take up the drums, but as always with Mesa, there's more…

Via three knobs on the rear panel, it enables you to run any of the three modes at any one of five power settings. Maximum is 0dB/100 watts, minimum is -16dB/3 watts: any mode at any power setting.

It's worth pointing out that the more heavily you use it, the more quickly your valves will wear. In addition, there's also a half-power switch, which cuts two of the power section's EL34s.

What that all means is that you can stop worrying about the balance of preamp gain, power amp drive and compression. It's almost infinitely tweakable in the RA-100 so you can get the exact sound and feel you want.

And reverb! Whodathunkit in a rock-orientated head? We love reverb but if you don't, it can be hard bypassed completely.

More usefully if you like cleans with reverb but dirty sounds without, the RA-100 can do that too: apply it globally; to clean only, or clean and lo modes only.

Imagine a classic guitar sound: on-the-edge Hendrixy chords soaked in reverb through a lovely open-back 2 x 12; crunching tight rock rhythms à la Angus and Malcolm Young through a closed 4 x 12. How about some Steve Cropper single-note stuff for soul and blues, or some brattish Weezer-style riffage?

Now, as any guitar shop hero knows, a £299 modelling amp will do all that in terms of a very basic tonal ballpark. What they won't do is give it to you convincingly in a proper band scenario, punch you in the chest and shake you right down to the balls. The RA-100 does exactly that.

Mesa's Dual Rectifier and Stiletto Deuce are echoed in part: the urgency in the Recto's Raw mode for example, and the mid-gain regions of the Deuce.

Moving heavier in the hi mode, you don't get so much of the Rectifier's massive resonating bottom end; it's tighter and more focused, which works better in busier mixes, and is a great complement to your 6L6-playing bandmate, and indeed keyboards.

With fewer modes and controls in general, it's ultimately less versatile, too, but where it excels are those classic-voiced rock tones, including an extremely good impression of the fabled EVH-inspired 'brown' sound.

The Multi-Soak is a resounding success. It's easy to find a combination of front-end drive and power section dynamics that suits your playing style; either very high headroom and well defined, or heavily compressed and elastic.

But crucially - and here's the clever bit - it's at the volume you need to play at. Like any amp, it's at its most sonorous with all the taps open, but that simply isn't possible most of the time.

Scaling the power back yields much more malleable tonal and feel results than simply turning the volume down on the front panel. Having it independently tweakable across modes is exactly what you'd ask for if you were designing it yourself.

There was a time when offering everything to everyone in one amp was Mesa's raison d'être. The company still does that better than anyone, but for those of us who are on a tighter remit tonally, amps such as the RA-100 are very welcome.

It has a brilliant clean channel that's so much less square sounding than the majority of 100-watt EL34 heads, plus the flexible, channel-assignable reverb. The dual-mode second channel offers two routes to superb classic-voiced rock tones with humbuckers and single-coils.

Even better, it's blissfully simple to use. Finally, like all modern Boogies, the RA-100 is built to survive sustained, professional use.

Choosing this over a Rectifier is a no-brainer for anyone weaned on Marshalls and classic rock, rather than metal. It's less pricey, too, albeit still over two grand: sensible for a Mesa, expensive compared to Fender, Marshall and Blackstar, good value compared to Two-Rock or Matchless.

At the end of the day value is relative, but quality and tone are absolutes.