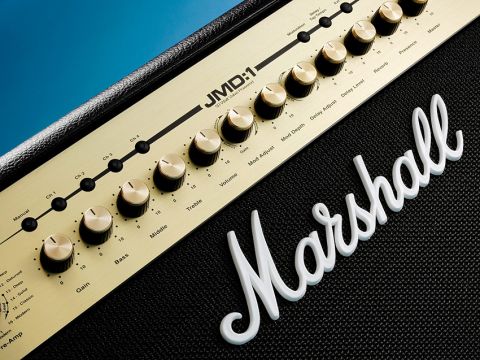 An excellent addition to Marshall's ever-increasing range. Another very good amp vying for your cash!

When your products ship in cartons with the words 'Guitar Amplifier' printed on them in five different languages, you know you've arrived as a major international manufacturing operation. Of course, Marshall arrived at this point four decades ago and, remarkably, is still on top of the game today.

While most of the company's core products are still made in Bletchley, Marshall also has manufacturing operations in India, Vietnam and now China, which is where the newest product range to bear that famous white script logo comes from.

Visually, there's no mistaking the JMD:1's heritage - gold control panel, gold knobs, shiny black corner protectors with gold screws and of course the Marshall logo. This is one of the most famous and well-known brands on the planet.

The JMD:1's vinyl appears to be somewhat thinner than that used on UK-made products, but it's still tough and has been expertly applied. Its electronics are contained within a strong steel chassis, which has had reinforcement ribs and locators pressed into it.

The power supply, output stage and preamp components are all on one large through-plated PCB, including the valve bases. Output valves are easy to get to but the single ECC83 driver valve is deeply recessed and will be difficult to replace. However, this won't need to be done more than every couple of years with normal use.

A second board behind the control panel contains the knobs, switches and logic stuff, as well as a daughter board for the amp's digital effects. The same main board is used for 50- and 100-watt models, which have identical controls - the writing on the panel is simply flipped 180° to accommodate the combo's upside down chassis configuration.

Both main boards are up to a decently high standard, while practically all the wiring is terminated in push-fit connectors. Internally, the JMD:1 looks neat, well thought-out and should prove to be quick and easy to service.

While most people still associate Marshall amps with valves, it's worth remembering that the company has also had considerable success in the solid-state arena, with products such as the famous JMP-1 preamp and AVT series.

So it's not a giant leap to progress to a fully programmable digital front-end, which is what the JMD:1 possesses. But before you break out the garlic and crucifixes, this digital preamp still fires into a traditional valve output stage, with either two or four EL34s providing the juice.

There are 16 different preamp models, separated into clean, crunch, overdrive and lead categories, which have been voiced by Softube to represent some of the best sounds from Marshall's vast history.

Next to the rotary encoder that selects these models is a familiar five-knob arrangement of gain, volume, bass, mid and treble, followed by the digital effects controls, which govern a range of useful delays and modulations, along with reverb.

Across the top of these switches are a series of push buttons that allow you to store and recall channel presets, as well as switching individual effects on or off and operating the JMD:1's foot controller. Finally we get global (non-programmable) presence and master volume controls.

The JMD:1's rear panel includes a series/parallel effects loop with switchable levels, which features a storable mix setting and can be on or off as part of a patch, along with a balanced speaker-emulated line-out and a handy line-in for patching in an MP3 or CD player.

There's also a headphone socket and a separate preamp out jack. Last but not least is a pair of MIDI sockets and a socket for the supplied six-button foot controller. This can either be used in what Marshall calls switch store mode, where you can assign any of the front panel switches to each of the six buttons, or preset store mode, where you can store entire patch presets in seven banks of four, giving access to no less than 28 different sounds at the touch of two buttons.

Overall, the design is logical, well thought-out and easy to understand, with a minimum of manual reading needed for some of the MIDI and footswitch stuff. The manual is typically Marshall: well-written, detailed and a good read. Each of the 16 amp models, for example, has a description, which includes an informative explanation of the original preamp topology.

Any digital amp which advertises facsimiles of other well-known amps or sounds has its work cut out from the outset, as everybody perceives sound in a slightly different way, consequently the person responsible for making the JMD:1's JCM800 model may have a different image and expectation of that amplifier's sound, response and dynamic range than the next customer to plug in and hear it.

Because of this, we don't place too much importance on how accurate or not the individual models are, it's more important that they simply sound good and make you want to play them. Having said that, some of the JMD:1's sounds are very close indeed.

The JMP-1 models do particularly well, as do those of the JCM2000. Some of the others have to be taken with a little pinch of salt, as they don't exist anywhere else. For example, Crunch 5 apparently combines the preamp of the 18-watt 1974 model with the EQ of the 1959 Super Lead.

Whether or not it would sound like that if it were made using resistors and capacitors we don't know but, nevertheless, it's a good chunky rhythm sound. Our other favourites included Clean 3 (based on the JMP-1), Crunch 7 (based on the Haze 40), Overdrive 11 (apparently a Bluesbreaker pedal plugged into a JCM800) and Lead 15 (again a Bluesbreaker pedal, this time plugged into a DSL100).

The JMD:1's onboard digital effects add considerable depth and spice up all the amp models. Modulation effects include phasing, flanging, chorus and tremolo, along with a fast noise gate, while the delays feature analogue, tape, multi-tap and hi-fi types.

As with all products of this type, the best results come from getting the core sound right to start off with, then adding in your desired effects one at a time. Both delay and modulation are accessed from rotary controls divided up into segments for each effect. This means precise control is a little tricky as a lot happens in a small amount of travel, but the amp's capability to store things makes up for this.

As you'd expect from a Marshall, the JMD:1's overall voicing and character is not for the timid - this is a big, bold amp and benefits from being wound up loud, so the valve output stage can add its own character to the mix.

We often criticise digital modelling amps for their lack of dynamic range; with EL34 power taking care of business, this is much less an issue for the JMD:1. With the 100-watt head version plugged into a 4 x 12 cab, it's more than capable of drowning out the loudest of drummers, while the 50-watt combo is ideal for small to medium-sized gigs.

Sonically, there's very little difference between the two amps - the increased power output of the 100-watt model adds more definition to clean and mildly distorted tones, while we felt the 50-watter had the edge for heavier distortion at live gig levels.

The JMD:1 series could give other digital amps a hard time. The combination of authentic amp sounds and a valve output stage makes for a very capable all-round performer that's equally at home belting out hard rock and metal as it is playing jazz or country.

Aimed at those who want to mix in effects without a whole bunch of external boxes, power supplies and cables, we think it represents good value for money, although there's some serious competition, from Line 6 in particular.

One thing nobody can compete with, however, is the name and look of a genuine Marshall. Digital or not, there's no mistaking the JMD:1's heritage which remains as powerful as ever.