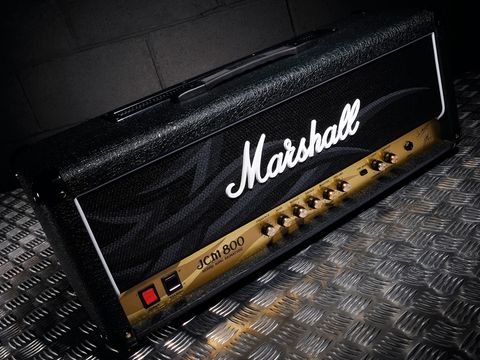 As long as you're aware that it does exactly what it says on its tattooed tin and not a great deal else, you'll be blown away.

Sadly, guitarists in ferocious metal bands rarely get the praise they deserve as far as their technique goes but make no mistake: Kerry King is an extremely good player. If you've heard Angel Of Death, you'll know that the rhythm parts are incredible.

For a company of Marshall's stature, very few players have been recognised with a signature amp and those that have been, such as Jimi Hendrix and Zakk Wylde, have used amps bearing Dr Jim's iconic logo since day one of their respective careers. That's certainly the case with Kerry King too, and his signature tone is made up from a JCM800 2203 head and a 10-band graphic MXR EQ pedal with which he boosts both the mids and the gain.

King has dubbed his main 2203 'The Beast' and Marshall took scrupulous readings from both the amp and King's own EQ pedal to ensure the new head could recreate the tone on demand. Thanks to a switch also named 'The Beast' on the amp's front panel, it can. A specifically designed and voiced EQ section is engaged that provides the King rhythm tone that works alongside a high-quality noise gate, controlled by the threshold pot.

The amp's master and preamp volume pots still operate in The Beast mode, as does the main four-way EQ, allowing you to colour the tone as you wish, while the Assault control lets you regulate the level of boost.

Elsewhere only the provision of a single input and a front panel decal based on the tribal tattoos that cover King from head to foot give anything away regarding the amp's departure from a classic 2203 spec and subsequent potential for aural damage...

With The Beast still in its cage for now, we instantly find that the classic JCM800 rock tone is present in spades. To our ears the best tones are to be found with humbuckers rather than single-coils, but a warm overdrive complete with a wholly musical valve bloom and associated compression should be easy to enjoy with pretty much all guitars.

As Kerry himself found back at the beginning of his career, a stock 2203 won't get quite dirty enough for those extreme metal tones but, for all styles of rock it remains among the very best amp configurations of all time. With the master set at around half and the preamp at three-quarters, we dust off a Gibson Les Paul and revel in the tone, full of Marshall's familiar warmth and upper-mid clarity.

Despite the large number of high-end amps that offer modelling, flexible channel switching and so on, there's something very intimate about plugging into a single-channel all-tube head and rolling back the volume to obtain a clean sound, which is perfectly good here.

With a USA-made, EMG-equipped BC Rich Warlock, we reach for that Beast switch with equal amounts of trepidation and excitement. As we expected, the tone changes out of all proportion. It's best to set the gate as soon as you've arrived at your desired tone settings too: the small LED within the switch illuminates when the gate itself is closed, allowing for accurate adjustments.

Kerry's tone is actually cleaner than you may think - by which we mean more articulate and defined rather than actually lacking in sheer gain - and, with our Warlock, the sound is as close as anyone's likely to get to that Slayer roar. For ultra-fast and staccato-laden riffs, the tone is absolutely spot-on and we find that setting the preamp to six and the Assault control halfway gives ample gain.

Obviously as you turn it up, the sound becomes dirtier and fuller, but also slightly less distinct: still, the excellent gate operates just as it should, giving absolute silence once you've dampened your strings, irrespective of volume.

That classic 2203 hard rock tone certainly gives plenty of power to your arm, but this boosted sound is much more brutal and has the added advantage of never becoming overly indistinct. It makes for a nice change and if you're the sole guitarist in a metal band, you'll find this style of sound will suit your needs much more efficiently: abundant power, projection, width and gain are just some of the highlights.

There are far more appropriate amps from Marshall's illustrious canon to choose from should you require additional tonal versatility, multi-channels and the like, and the only thing we really missed here, as we'd feared, was a remote switch for the Beast setting: hopefully this won't prove to be a trick missed.

This is a heavy metal amp, pure and simple, and if you require specific blues or clean tones, you should be prepared to look elsewhere, even though the amp's standard side performs perfectly acceptably in these regards.

So, within the realistic parameters a Kerry King signature amp should be placed, it does its job remarkably well and, The Beast notwithstanding, the amp is a genuine recreation of the lauded 2203 that sounds just as good as we recall.

With a few exceptions, Kerry uses just one tone throughout a Slayer show and the fact that very sonic boom resides within this amp is a testament to just how close Marshall has got to the man's original head. There's no doubt that active pickups are part of the equation too, but we find that The Beast switch effortlessly turns most humbucker-equipped guitars into aural weapons.