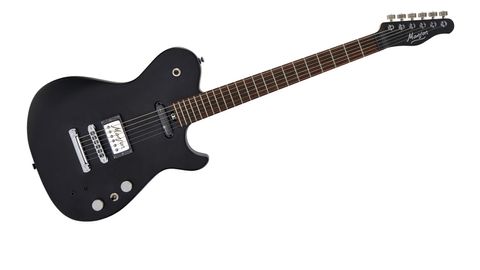 We prefer the Manson MBK-2 humbucker and onboard Sustainer to the MA-1's 'Duncans. The choice is yours.

The reputation of Devonshire luthier Manson has grown in stature alongside that of its most-famed endorsee, Muse's Matt Bellamy. Now its overhauled it's T-style M-Series, altering the body shape, with an emphasis on playability.

The 46mm-thick alder body, with trim belly cut and gently radiused forearm contour, is covered completely by the industrial-look 'dry satin black' finish, which gives the guitar a very functional rock appearance: play me, don't just look at me. And playability is what the superb neck is all about.

Again, there are no frills - the compound radius rosewood 'board has no face markers, just small side dots on the join line between the maple and relatively thin rosewood.

The fretting, from a chunky but not over-big wire, is perfect, like the setup. The actual 'soft V' profile combines reasonable depth - 20.6mm at the 1st fret, 21.6mm at the 12th - with a sloping shoulder that makes you think it's thinner than it actually is.

This streamlined, detailed build continues through to the hardware: we have superb Gotoh HAP tuners - the height-adjustable posts mean Manson can set just the right back-angle for the strings behind the perfectly cut black Tusq nut without resorting to string trees.

By design, the guitar uses the Gibson-like standard of a (Schaller) tune-o-matic-style bridge and stud tailpiece. Not only does this set-up give a midrange push to the sound, but it also means the intonation is spot-on. The guitar is really stable tuning-wise, and sounds beautifully in tune at any fingerboard position.

The basic difference between the previously reviewed MA-1 and 2 is the pickups: the MA-2 uses a Manson MBK-2 bridge humbucker, made by Bare Knuckle and a 'rail' single-coil- sized pickup that's actually the driver/neck pickup for the optional Fernandes Sustainer, which is operated by the two mini-switches just below the tone control.

In addition, there's a volume, tone and three-way toggle pickup selector, with the final optional extras included being the oversized knurled-edge control knobs and slightly smaller versions for the tuners.

Eagle-eyed readers might have noticed the guitar seems to have two black-tipped toggle switches. Indeed, the switch placed between the volume and tone is the standard pickup selector; the one on the shoulder is a killswitch: standard on Evo models.

The MA-2 feels identical to the MA-1, the difference is in the voicing of the pickups. The bridge 'bucker sounds Seymour Duncan JB-like, but clearer in the high end with more detail: less cloudy.

The neck pickup has quite a lot of percussion - not the most soulful neck pickup, but it has a dual function as the driver for the Sustainer system (when you engage the Sustainer, only the bridge pickup is voiced).

The upper three-way mini-toggle selects the different modes: a more fundamental harmonic mix in the centre position, then two options, which emphasise higher harmonics. It's a perfect tool for ethereal effects, especially with delays and reverb, and the kill switch creates that stuttering feedback effect you hear at the end of the Clash's London Calling.

With practice, you can evoke all sorts of bowed cello-like sounds, and with gain it sounds more chaotic - as if you're playing a hollowbody on the edge of feedback. Of course, you can achieve all this at bedroom volume levels.

In its standard format, this is an excellent modern rock-intended instrument, superbly made with a Tele-meets-Les Paul-on-steroids voicing. With an expansive pedalboard, there's little you couldn't achieve.