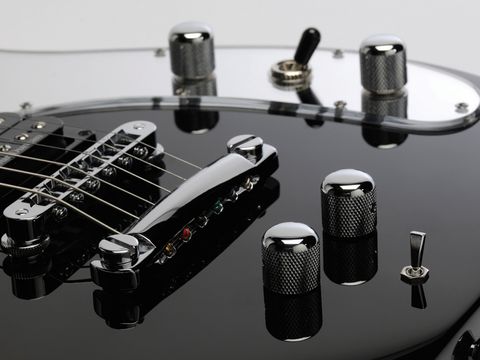 The Fuzz Factory isn't for everyone, but not including it on the spec list feels like sucking the joy from this model. It all adds up to a tough decision and an axe that the expression 'try before you buy' could have been invented for.

We never thought we'd say this, but Devon rocks. Forget the county clichés of milkmaids and custard - these days, it's all about the intergalactic meteor-rock of Muse's Matt Bellamy, and the British luthier that supplies his guitars, Manson.

Now, let's make something clear: the MA-1 isn't a Matt Bellamy signature model. Despite the still-fairly-supermassive price, this new production model is actually designed to let working musicians in on the action. Still, you get the impression Bellamy would approve.

Sure, you've got a cool spec of Strat-style timbers and USA Seymour Duncan humbuckers, but the real curveball is the built-in Z.Vex Fuzz Factory.

Manson makes a magnificent guitar, and the Czech production line has played a blinder here: there's not a rattle, squeak or chip of paint - great stuff, especially considering this is a prototype.

The body design is apparently 'new' (although it definitely reminds us of something…), but the soft 'V' of the neck profile is a Manson perennial, adding up to a sleek and smooth physical playing experience that would be truly effortless were it not for the lack of fret markers.

The Seymour Duncan '59 and JB are rock guitar staples, but in all honesty, the clean sound doesn't knock us out when you factor in the price.

They're better when overdriven, with the lighter tonality of alder and maple contributing to an output that's savage and cutting, a mixture of humbucker width and top-end bite that could strip paint.

Now, it's possible to get this effect in pedal form for a street price of around £170, and while both units have five dials, the MA-1 only gives real-time access to Compression and Stab (the other three have been included, but you'll need to adjust them with a screwdriver, which ain't gonna happen at gigs).

More subjective is the sound of the Fuzz Factory itself. While, say, a built-in auto-wah would probably sit well with most guitarists, the Z.Vex is sonic Marmite, with its burglar alarm shriek and the decaying crunch of its space filth either sounding epic or unbearable (delete as applicable).

So, this is not a Bellamy signature, but the fact remains, to get the most from this add-on, that's the kind of music you'll need to be playing.

Anything that pushes the boundaries is okay in our book, and the MA-1 very nearly gets a standing ovation. The physical performance and build quality are beyond reproach, the distorted tone is dynamite, and yet… the factor that makes this guitar unique is also the one that makes it expensive and divisive.