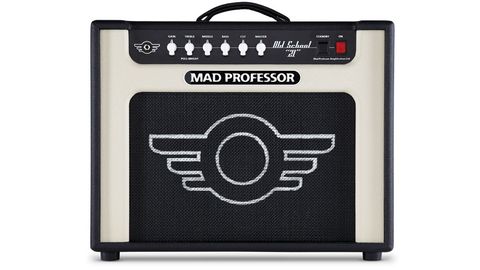 It doesn't quite live up to its rather hefty price tag but the Old School '21 is well worth auditioning for those on a quest for tonal nirvana.

Finnish company Mad Professor is best known among guitarists in the UK for its sweet-sounding, hand-wired boutique pedals such as the Little Green Wonder overdrive and the Deep Blue Delay.

In the past couple of years it has introduced affordable PCB-based versions of its illustrious pedal lines without compromising the company's reputation for great tone, much to the delight of the less well heeled of us. Now, we've got one of its amps, a vintage-voiced combo that is neither pumped full of PCBs or in any imminent danger of being described as affordable.

The amp's name also reflects how it was assembled. "We wanted it to be built in the old-school way," says Mad Professor founder Harri Koski. "The whole signal path is hand- wired, making this amp very durable and easy to service.

"The power distribution and fuses are on a small PCB," he continues. "That is pretty much the only way to properly install the extra fuses. We have to make the amp safe for the player, and protect all the expensive parts in the amp. We didn't want to go too far with this 'old-school' approach!"

All the research on the Old School 21 was done in Finland but the amp isn't being built there. "To build it in Finland is not the cheapest way to do it," says Koski. "When we found a manufacturer in the UK who could build these amps at as good (or even better) quality than we can, we were very happy. The UK has a heritage of making the finest amps in the world, and we're happy to have our amps built there."

Indeed, the amp's build quality is well up to scratch, with only the silk-screened logo looking a little on the cheap side. It's solid, too, with a footprint roughly the same as the vintage amps it's inspired by.

"We like the Fender Deluxe Reverb, Vox AC30, Marshall 18-watt and so on, but these are all kind of limited to one sound, either clean or distorted," he continues. "We wanted a classic-sounding amp, with nice firm clean, strong distorted tone and very solid tight tone with fat low end, nice midrange and cutting, but not piercing high end."

"This is an amp you can control with your playing touch or guitar volume, and with just a few pedals the number of tones is almost unlimited," says Koski. "The amp is at home with pop, country, jazz, pop, classic rock, rockabilly and many other old-school styles."

Well, this writer is rockabilly and country daft, but it actually takes us a little while to get acquainted with the Old School 21.

While at first earful it sounds a little flat, boxy even, fiddling with the controls soon reveals a more attractive Fender-like sparkle. Cranking up the volume unleashes a strong, almost Hiwatt-like overdrive with just enough oomph for classic-rock stuff - humbuckers help a lot here. This amp does its thing without really blowing our socks off although adding our Retroman 'Beano' treble booster into the signal chain really pulls out some old-school rock 'n' roll grunt and adds some complexity to the tone.

We're not entirely convinced that we'd take this amp over the Fender, Vox and Marshall jobs mentioned earlier, but it does offer a solid approximation of all three. The Old School 21 is more tonally versatile than most of the classics from back in the day.

The feedback from guitarists who have already come face-to-face with the Old School 21 is generally along the line of 'nice amp, shame about the price'. That's the big fat juicy fly in this otherwise perfectly acceptable ointment. The Mad Professor lads have endeavoured to design an amp with a vintage vibe that also has a certain wider appeal.

The problem is, by giving the amp a price tag that's the wrong side of £1,500, Mad Professor has put the amp in competition with some very tough opponents - the likes of Matchless, Suhr, Mesa... a cast of thousands of top-end amps from big-name brands.

While the Old School 21 feels a bit out of its depth in such illustrious company, it pretty much nails the objectives of its designers: to create a "gig-friendly, easy- to-set-up amp with great clean and distorted tones". Well worth an audition if the usual names don't appeal.