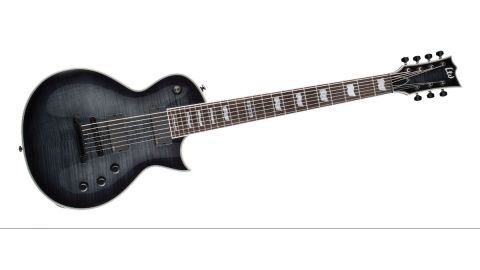 With its Black Beauty-style binding, dark satin finish, and all-black hardware, this could very well be the axe that takes you to seventh heaven... The question is: can you can handle it?

Bearing in mind the inexorable rise of tech-metal in recent years, it's almost difficult to picture a time when seven-string guitars were unheard of.

Now, they come in all shapes and sizes: you could walk into a guitar shop pretty much anywhere in the world and be guaranteed to find at least one guitar that's one string louder.

Whereas most models opt for sleekness to almost disguise the unfamiliarity of an additional string, the single-cut LTD EC-407BFM does anything but. This is an absolute beast of an instrument and weighs accordingly: purpose-built for LP players who don't want to sacrifice their higher notes for tuning down.

Although LTD dubs the EC-407BFM a baritone, it's tuned to regular seven- string tuning (BEADGBE) out of the box; the differentiator is the 648mm (27-inch) scale length, which makes it play more like the baritones of yore than a modern-day seven, while increasing tuning stability.

You could say it's a very specific guitar in that sense - instead of wide appeal, LTD has pinpointed a niche market indeed. Best of all, it sounds exactly how it looks: gloriously meaty and dependably Herculean... Basically, your next-door neighbour's worst nightmare.

And like the iconic Gibson single-cut it takes its influence from, this is an instrument that instantly puts you at ease, the kind of guitar you know you can depend on.

The bulky tree-trunk neck won't be for everyone - if your hands are on the smaller side you probably won't stand a chance - but, in all fairness, LTD makes plenty of seven-strings to cater for that.