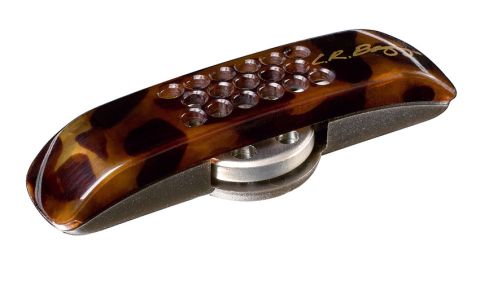 Beautifully designed bridge-plate microphone that might just change your perception of how good an onboard acoustic pickup can sound.

Lloyd Baggs' California-based company has given us a constant stream of pickups that attempt to address the limits of the ubiquitous undersaddle piezo strip, which is still standard on the majority of electro-acoustic guitars.

The company's iBeam, with its film sensors and bridge-plate mounting, certainly produced improved results, but the Anthem Series offered the best of both worlds with the introduction of Baggs' Tru-Mic technology, combining a condenser mic with the Element under-saddle pickup. This year, the company unveiled the Lyric, the next stage in essentially putting a microphone inside your guitar.

The Lyric is easy to fit, although if you haven't got a hole for the endpin jack pre-drilled into your guitar, then you might be better off seeking professional installation. It simply mounts onto the bridge plate underneath the bridge by means of a stick-on pad; the same method is used to attach the volume control to the inside of the soundhole. Then you just need to place the battery pouch inside the guitar and power it up with a nine-volt block battery.

The system places the mic approx 3mm away from the soundboard, which LR Baggs believes not only senses the entire soundboard, but also promotes high gain before feedback occurs. Importantly, the Lyric incorporates noise-cancelling technology that Baggs says "rejects 'boxy' reflections inside the acoustic chamber. This patent pending minor miracle enables the mic to act as if it were outside of the guitar, delivering a clear and open performance."

Aside from the volume control, there's a small adjustable mic presence control that allows you to adjust the high-end response to your own setup and taste. The Lyric's preamp is mounted in the extended output jack enclosure and, again, the circuit design offers various innovations that are designed to tighten the lower frequencies and maintain the mic's 'sweetness' no matter how hard you play.

We mounted the pickup onto a well-gigged Tacoma dreadnought and put the signal through our Trace Acoustic and AER test amps. We also recorded the system to check the sound, without playing the guitar, through studio monitors.

Immediately impressive, the Lyric produces a very classy sound that is beautifully balanced, crisp but not over harsh and with an unquestionable mic'd sound. We recorded some parts just DI'd into our laptop's DAW and, again, accuracy is highly impressive. Of course, unlike an external mic, you can't move it around and/or introduce the room to your sound, but even if we were mic'ing the guitar conventionally, we'd definitely take an output from the Lyric as well. It really is that good.

The Lyric is highly feedback-resistant. With our Trace Acoustic at full level, it was frankly hard to get the system to squeal. Aside from the pickup's volume and presence controls, you have no other onboard control: no phase switch, notch filter or three-band EQ. That might not be enough for some players, depending on your gig.

On the other hand, it means there are no modifications needed to your prized guitar, and with something such as LR Baggs' fabulous Venue DI, you have all the tuner, preamp/EQ and output features you need right at your feet.

The sound 'quality' of an acoustic is highly subjective. Add in its amplified sound and you're into a complex world of different pickup types, various stages of EQ, not to mention the wonderful world of feedback rejection, PAs and sound engineers.

The Lyric is a marvellous aide, especially for players who want studio, mic-like tonality coming out of their acoustic amp or PA. Also, if you're recording at home then it's not always easy to have a perfectly quiet environment. Again, the Lyric is remarkably accurate in here, giving you mic-like tonality direct into your recording software.

So while we can't make any promises about your actual playing, we can recommend the Lyric, and wager that it'll improve your amplified sound.