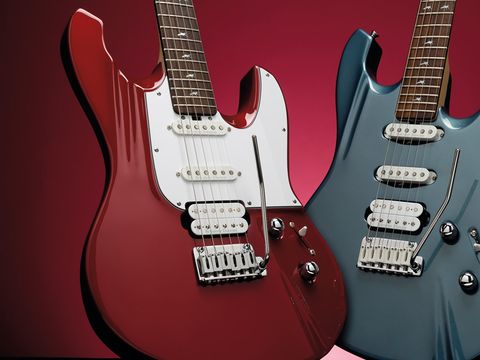 In a market obsessed with fifties and sixties designs it's refreshing to see a different spin and Lodestone does it with style and panache.

Although the UK manufactures a relatively small number of guitars per annum, we are seeing more and more UK-designed instruments being made around the globe. Lodestone guitars are designed in the UK but built in the Czech Republic, and it's certainly a lot easier to fly to Prague than the exhausting travel to the Far East when you need to check on progress at the factory.

In a previous life Lodestone mainman Mark Gooday headed Trace Elliot and was responsible for numerous designs including the T-Bass that is really the forerunner of the Lodestone range in that both designs employ the very distinctive 'Laidback' headstock.

The very stylish head does look larger than the time-honoured elegance of the Stratocaster - it's approximately 30mm longer including the string distance from the back of the nut to each tuner - and there's a little more bulk, especially in the area behind the nut.

The tilted tuner placement is a little more ergonomic, especially for a bass, but on the other hand we don't recall too many of the millions of Strat owners musing "if only those tuners were tilted". The placement also increases the behind-the-nut string angle which does away with the need for string trees and - so long as the composite nut is properly cut - should not adversely affect the tuning stability of the vibrato.

"Acoustically the guitar has a bright-edged, but not particularly woody sound. Expected, perhaps, with that dual fulcrum floating vibrato and the combination of the steel block and very hard ceramic saddles."

More stylistic flourishes abound with the body design. It's clearly based on a Strat, but offset more like a Jazz Bass so the treble side waist is lower and the bass-side lower bout is sleeker, more curved and less bulbous.

A little bulk has been added to the horns, which have angled tips, the cutaways have subtle chamfers and the top of the body is cut away to leave stylish ripples. Does this additional shaping, on top of the more usual light forearm and ribcage contouring, add anything to the playing experience? Not really, but we like it.

The chamfered body heel, which holds the neck via four inset screws, is again quite heavily rounded to the edges. It's still a little square, but actually it sits really well in your palm and top-fret access, while no better than a Strat, is more comfortable.

Shaping aside, the Lodestone sticks firmly to tradition with an alder body and one-piece maple neck (quarter-sawn not slab-sawn like the majority of maple bolt-ons) topped off with an Indian rosewood fingerboard. The neck shaping is very good, an old-style quite chunky 'D' rather than a more modern shallow 'C' section. The neck back is satin finished too and feels almost like raw wood.

The fretboard is a rich dark chocolate and the fretting is tidy enough, although a final mirror-like polish and the rounding of a couple of rogue fret ends would elevate the feel, and the medium gauge wire (approx 2.6mm wide) feels a little on the low side (barely 1mm high). With the supplied low set-up and .009-.046s the feel is quite tight and snappy - raising the string height and installing some .010-.046s brings a noticeable improvement.

Bright Hollywood-teeth-white ceramic saddles are loaded onto a quality Gotoh 510 vibrato and it's a deceptively complex design. While the steel base plate uses heated and case-hardened knife edges, the FST block is chamfered and deep drilled.

Via unique internal geometry the string only touches the block at its anchor point before resting on the saddle itself, a feature that Gotoh believes, "gives direct pressure on the intonation point of the saddle for better sustain and minimises string hang-up giving increased tuning stability."

The ceramic saddles follow the geometry of the Gotoh parts closely but under a magnifying lupe you can see they're more crudely machined and the notched break point at the front on the saddle isn't as smooth.

However, the two outer saddles have tracks for the height adjustment screws which under string tension holds all the saddles in the same position - they don't move like vintage-style Fender saddles and those notches keep the string spacing correct.

As supplied the push-in stainless steel arm sits rather high. That is until you realise the end is threaded and by rotating the arm clockwise it'll lock down onto a bolt in the arm holder - it works just like a normal screw-in thread, although the tension adjusting screw collar allows you to get the right feel.

Clever stuff, though oddly no mention is made of this feature in the Lodestone 'user guide'. Likewise the two pivot posts have stud locks - once height is set you insert a small supplied Allen key and lock them down.

The vibrato is designed to float parallel to the guitar's top - as supplied is doesn´t have the pretty much standard tone upbend on the G string and in reality the neck pitch would need to be increased slightly to facilitate a slightly higher placement of the vibrato. At the other end of the strings are Gotoh's easy-to-use Magnum lock tuners: fine by us.

Electronically, the Pro S uses a PAF-alike Duncan '59 at bridge, mounted directly to the body and two flat-pole SSL-2 single-coils mounted on the almost Tele-like scratchplate. A five-way lever combines the pickups in Strat style and chromed Tele-like knobs are used for the master volume and tone control. The output jack is angled so placing your lead through your strap is easier.

Acoustically the guitar has a bright-edged, but not particularly woody sound. Expected, perhaps, with that dual fulcrum floating vibrato and the combination of the steel block and very hard ceramic saddles.

The Pro S kicks off with a passable display of Stratiness more modern than vintage. The neck and middle pickups lean into the vintage camp though certainly don´t nail an old Strat sound. The sounds are less woody but they cluck as they should with a percussive edge and bright and steely highs. In combination they´re not hum-cancelling and again the sound is typically funky, slightly softer and hollowed.

The middle pickup here proves strong and gutsy without the clout of the humbucker but with more edge than the neck single-coil, while that humbucker nails a good, classic rock voice. Overall the tonality is bolt-on bright - you´ll have heard darker, sweeter Strats but we´ve heard harsher ones too.

The vibrato feels good and stays in tune as well as any of its type. The guitar seems very happy with older blues and rock styles and with the help of some gain boost can slip into more contemporary gained voices too. The crisp almost active-like edge to the tone means that despite the relatively low/medium output pickups, the Pro S performs well with ultra-gained, compressed amp tones.

Despite the visual style there´s very little that´s new here. There´s a crisp high-end that some might say is too crisp. We try replacing the ceramic saddles with the original steel ones - also supplied - and if you want a rounder high end with a little more mid-range body then this is the way forward. You could even combine both steel and ceramic saddles.

We´re sure many players used to an H/S/S-with vibrato format could simply plug in and go off and gig the Pro S with no problems. For the most part, this is a finely made guitar boasting quality parts and pickups, not to mention a very cool and practical gigbag, and it makes the current Fender American Strat HSS look pricey by comparison.

There are areas for improvement, however. We certainly feel a higher fretwire would add a little in the playability stakes. The lack of upbend is a matter of increasing the neck pitch and raising the vibrato - easy enough to do on a bolt-on, but it would have been nice to see it sorted at source.

More challenging is that Laidback headstock which gives a different visual appearance - and we're not that sure that it adds any function. Also those ceramic saddles do give the guitar a crystalline high-end edge that players wanting a little more vintage sweetness might not like, although the supplied steel saddles certainly tame those highs. In short, the choice is yours.