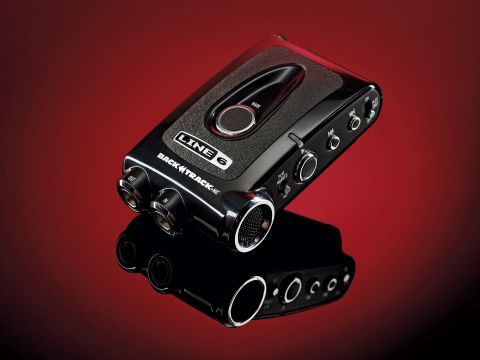 Never miss a moment of musical inspiration again - this will record the lot!

We must have all done it at one time or another. We're noodling away on the guitar, just improvising, making stuff up, when suddenly we come across a riff, lick or chord sequence that we think is absolutely brilliant.

One of several things can now happen. Ideally, we can instantly recall exactly what it was that we played and can play it again and lodge it in our memory forever until, perhaps, it forms the basis of our next hit single.

In your dreams, pal! More likely we either attempt to play it again but have lost the plot completely along with our moment of musical genius, or we can actually remember it but then forget it again while we are fumbling around trying to find something to record it on.

Fortunately, if you invest in Line 6's latest innovation - BackTrack - that will never happen again, for BackTrack captures everything you play without you ever hitting a record button.

BackTrack records to an internal Flash memory. It notices when you start playing and automatically splits out individual audio events. If you have a particularly inspired moment you can hit the BackTrack's 'Mark' button and it will be marked as an important event that you can go back to for instant replay.

BackTrack saves all the audio events as individual .wav files and puts them into either a 'marked' or 'unmarked' folder for easy transfer to and from a computer via USB.

BackTrack comes in two versions. BackTrack + Mic, as reviewed here, comes with a built-in microphone plus a headphone output while the other version, simply known as BackTrack, has neither.

The only other difference between them is that the mic-equipped version has a larger memory capacity of being able to record twice as much (up to 24 hours) of non-stop audio. Power for both of the units comes via a non-accessible onboard battery that can be recharged from a computer.

Physically BackTrack + Mic easily fits in the palm of your hand - it's about the size of a fat mobile phone, some of that fatness being down to an integral moulded clip that enables you to attached it to your belt or guitar strap.

A pair of 6.4mm jacks take your guitar signal and pass it back out to your amp or whatever you are plugged into and the various controls are neatly arrayed on the unit's top surface and sides.

Operation is straightforward - just plug a guitar straight in (or take an output from your amp modeller), connect the output to an amp or monitoring system or just add headphones, turn the unit on, start playing and everything will be recorded automatically. A status light glows continually or flashes in various colours to tell you when audio is being captured or when an audio event has finished. To hear the audio back there are 'play', 'back' and 'forward' buttons and you have the choice of playing back all the audio files or just the 'marked' segments. You can also loop sections of audio should you wish.

BackTrack records audio by default at the CD standard of 16-bit/44.1kHz but other audio quality options are available from a software utility that enables you to set up exactly how BackTrack will handle audio events - you can set the level that will trigger automatic audio capture, set it up to discard events under a certain length and set the amount of silence that would indicate when audio should be split into separate events.

Once you have set BackTrack up to your requirements you can just turn it on and forget about it, secure in the knowledge that you will be recording everything you play.

BackTrack is without doubt a brilliant idea. Line 6 calls it 'inspiration insurance' and it is not wrong - with one of these in your signal chain you will never lose anything you may come up with on guitar.

If you compose acoustically with guitar and voice, the BackTrack + Mic is the solution, but the less expensive BackTrack is worth every penny if you just want to plug-in.