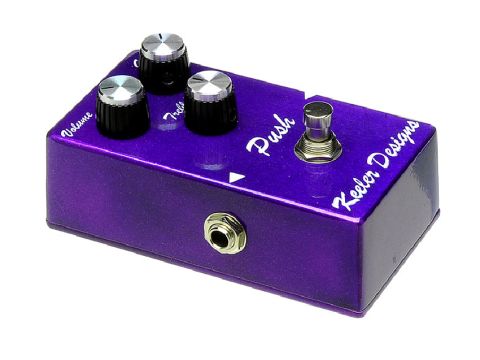 Another impressive stompbox from Keeler that lives with the very best of the competition.

Rob Keeler's pedals have impressed us lately and the Push overdrive is no exception. On the face of it, the Push has much in common with other boutique Tube Screamer-style drive stompboxes, with just three knobs sculpting a range of tones from a low gain, high volume boost perfect for pushing a valve amp into overdrive, to more saturated, searing lead tones.

The unit's robust Hammond-style enclosure and chunky true bypass footswitch should be more than capable of coping with a lifetime of road (ab)use. The Push's most interesting twist when compared to the competition is that rather than a straightforward tone control, there's a treble pot that allows for more focused fine-tuning of higher frequencies.

Some boutique-style overdrives such as the T-Rex Alberta - an office favourite - aim for a smoother, more cultured take on the ever-popular Tube Screamer sound, and that kind of voice is here if you want it too. However, we had the most fun by cranking the gain and enjoying the extra dirt that's in the Push's tank compared to many pedals of its ilk.

There's really only one reliable way to sort the wheat from the chaff when it comes to gear aimed at the gigging musician and that's to hear how it responds in a high volume, full band scenario. Here, the Push excels. Crunchy but defined rock rhythm sounds and singing sustain are accompanied by a serious volume boost if required so there's no danger of those great sounds getting lost in the mix.

If you're in the market for a top-drawer overdrive but your tastes are more blues than rock orientated then perhaps the more restrained voice of Keeler's Pull pedal might be worthy of investigation. But if you need a dirtbox that's at home in harder territory and you can justify the outlay then the Push is more than worthy of audition.