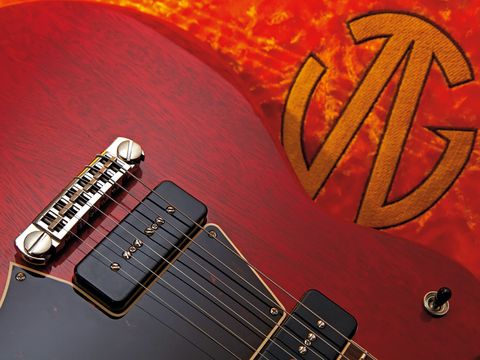 If classic soapbar single-coil sounds are your thing, this is the sort of guitar you'd sell your entire collection to buy. It's seriously good.

As far as we're aware, the Premier Builders Guild (PBG) is a unique concept.

Instead of creating just one brand, PBG makes guitars from b3, Koll and Johan Gustavsson, along with designs from Roger Giffin and Dennis Fano's artfully distressed instruments. Until early 2012, Jason Schroeder was a part of the programme too, but his company has now decided to go solo.

"For those builders, it frees them up to work on their custom business, to develop new designs, and they're getting a great master builder in Gene Baker who executes their designs in close contact with each maker," explains PBG's Peter DePasqaule. "So they're on the phone, sending e-mails and pictures back and forth. They come to the workshop to check on production and meet up with Gene.

"Denis Fano is a PBG builder, like Gene Baker, but the other guitar builders license particular lines to PBG, we don't own them." To clarify, Baker's b3 and the Fano brand are owned by PBG along with the Two-Rock and Tone King amplifier companies; the other guitar builders maintain their independence but allow PBG to build versions of some designs.

"It's a more accessible way to order a custom guitar," continues DePasqaule, "it's not a year-and-a-half wait for the guitar from the maker. You're not worried if the builder will still be in business in a year-and-a-half.

"So the idea is to get a builder-associated guitar in a much more reasonable time frame and it'll usually be a little cheaper than if you order it custom, sometimes significantly cheaper." Time to take a closer look…

Johan Gustavsson is based in Sweden and as well as being a highly regarded maker of some 20 years standing he's a professional touring and session player. The Bluesmaster reflects both aspects of that career.

In simple terms it's a remake of the fabled single-cut Les Paul Special and, while it's perhaps the less 'experimental' than other PBG models the b3 Fire and Koll Duo Glide, it's exactly the guitar a touring muso would want to take out, leaving (perhaps) their real fifties Gibson in the closet.

Gustavsson follows the original recipe closely although, of course, the body outline is more Tele-meets-Les Paul Special. It's slender, at the relatively standard 46mm; there are no contours, just a generous edge radius.

The heel is fairly classic, the horn enabling good top fret access and the neck is chunky with a hint of a 'V', which reduces a little bulk at the shoulder: a very good neck shape. The frets here are slightly low and fat - a little more old-school Gibson - and the bound fingerboard and fretting are very cleanly done.

The string pull might not be straight over the nut to the Kluson tuners but the back-angled head looks nicely classic; likewise the dark faux tortoiseshell-faced pickguard.

Powering is classic too: dual Lollar soapbar single-coils with individual volume and tones while a Pigtail adjustable wrapover is partnered by the Tone Pros/Kluson vintage-style tuners. No strap loks, just old Gibson style, quite small, buttons and the output jack is one of those recessed Tele-types.

There's something a little special about the ring and resonance and, although weightier than our reference Les Paul Junior, strapped on the balance and feel improve on the original. Likewise the neck shape, a little wider at the nut, is just right, the cream edge binding looks nicely old as you glance down with it strapped on.

A little lighter and brighter than our Junior in bridge position, it enhances that beautiful hot single-coil/mahogany marriage that's both dark in the mids and lows with sparkle on top.

Switch to the neck pickup and many blues or old style R&B and even electric jazz players could probably have a career just here: full fat and plumy but there's that single-coil character that just adds texture and a little edge.

Both volumes clean up nicely so the dual pickup mix is another key area for funkier and more Fender-y chopped rhythms; old and rich not modern and thin.

As we crank up our test amps the Bluesmaster continues to shine: that textured grunt of the bridge pickup never fails to impress and here it's juicy, the guitar is alive but not out of control and with an added solo boost the neck pickup is pure Gilmour. We'd wager with a slightly tougher action it'd make a superb slide guitar too… if only we had more time with it.

In short, this instrument just feels like home. The perfect sideman or journeyman guitar, call it what you will, but with a few pedals and a decent amp there's not much you can't cover here.