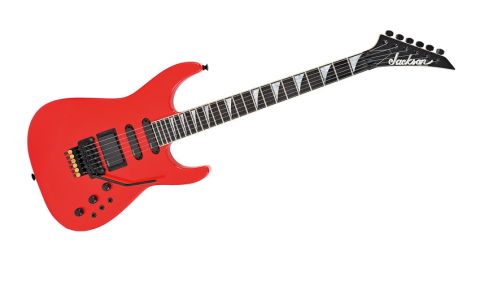 An authentic recreation of a classic, built by a man who was involved with the original. Not even the SL-1 is as desirable a Soloist as this!

In 2014, Jackson continues to produce electric guitars of the highest quality. However, none has endured like - or inspired as many other makers as - the Soloist, and since its inception in 1984 it's hardly changed in spec, feel or popularity.

The now Fender-owned company has marked the Soloist's 30th Anniversary with the production of just 30 instruments that follow, as closely as possible, the spec of the original 1984 model. Each is hand-built by Mike Shannon, who joined Jackson in 1980 and has been involved in the production process ever since.

Let's take a blunderbuss to the elephant in the room at the outset: what are the differences between this and the SL-1 from the USA Select Series: a guitar that's available in far higher numbers and for less corn than the 30th model?

"There are actually many subtle differences," says Mike Shannon. "If you notice, the Anniversary model has the original logo with the 'o' and 'n' of 'Jackson' actually touching. The rear control cavity is larger, again like it was back then, and we left out the first side dot on the Anniversary models, too. It's really close to an '84, the earliest Soloist that we made."

And Jackson hand-makes each one? "Basically, yes. The only CNC work that's done on these would be the pocketing for the shark-fin inlays and the fret slots. For the rest of it, I still have some old fixtures I've kept around that we use, and everything is either done on the pin routers or using the hand tools we used back then."

It certainly has the vibe of the originals, with the unashamedly brash and bright Ferrari Red finish of our example ticking all the boxes: you'll get noticed if you strap one of these on. That was the point.

Arguably the Soloist's most important feature is its neck- through-body construction, which Mike discusses in our full interview on p105. In keeping with the 1984 spec, the 30th features a three-piece quartersawn maple neck that also forms the central core of the body, where it's flanked by wings of poplar, rather than the alder of the SL-1. The heel is hand-shaped to form what Jackson describes as an 'Old Skool' neck joint, it's not cut back for improved fret access and its more rounded shape again mimics a feature from '84.

"If your hand goes in there your palm fits really nicely," muses Mike. "We did that heel all the way up to 1990, and I believe that it keeps the neck from flexing, as there's more meat in that area, so it keeps it more stable."

The neck feels wonderful, as was ever the case, but unlike similarly gorgeous necks from makers such as Tyler, there's very little that's Fender-y here. There's no stripped-back Charvel-style bare wood either, but an exquisitely finished piece that's as wide as an Ibanez but not as thin, being almost rectangular in feel. The rear is almost flat, with 24 perfectly finished frets bedded into an ebony board that's festooned with classic mother-of-pearl shark-fin inlays.

The double-locking Floyd whammy, still Jackson's go-to bridge, is a German-made Original Limited 1984 model that features a 37mm brass block, plus six brass fine tuners bereft of the familiar black coating. We'll address any tonal implications of this in due course, but it's set up nicely and operates as you'd expect.

Perhaps surprisingly, the 30th comes with EMG active pickups. "At the time, Jackson was making its own active pickups," says Mike, "but that's something we've not done for a long time. We use the EMGs now, but the first Soloist would have had those active Jackson pickups. If you look at the pattern of the control layout," he continues, "I still have the original template, and that layout of two volumes, a tone and three mini-switches is put together using the tools we used back in '84."

One volume is a master, while the second is assigned to the two single coils, and the three switches do allow you to flick quickly between settings, even though the layout is a little bit cramped.

Cleanly, the two single coil-sized SA pickups give tones that are as good as anything we've heard from a modern guitar. Beautifully clear and articulate, they offer crystalline chimes and a glassy performance that's excellent for funk, blues and pop... not to mention the middle eight in a rock anthem.

In fact, adding the neck pickup to the full-sized bridge 'bucker rounds off the active edges of the latter to give arguably the most usable clean tone of all. There's no shortage of sustain either, no doubt due to both the through- neck construction and the increased mass of the Floyd's brass block; dialling in a touch of chorus adds richness in that classic 80s manner.

We were concerned that EMGs loaded onto a maple through-neck would, tonally, be overly harsh. Well, although that active 'zing' is still present, there's no doubt as to the 30th's rock credentials, and using the humbucker, chords are big and tight and solos cut through.

Obtaining a VH-style rounded brown sound is much more of a challenge, but that's not a surprise considering the spec. Jackson users from the mid-80s, such as Ratt and Quiet Riot, employed a harsher guitar tone than Eddie anyway, and it's safe to say that the 30th sounds and plays as well as we remember: high praise indeed.

We initially baulked at the Jackson's £3,600 price tag, especially when you consider that you can get hold of a USA Jackson SL-1 for £2,900. However, if being frugal on budget was an overriding consideration in your buying decision, it's unlikely that any new USA Jacko would be at the front of your mind, and for the extra money you get as faithful a recreation of what is a truly classic guitar as possible... built by the man who was there at the start.

We absolutely love it, and as any vintage guitar nut will tell you, nostalgia is as much a part of guitar ownership as anything else. With just 30 pieces available worldwide, the 30th offers something aspirational, whether the 80s were pivotal in your musical life or not. Go in with your ears and eyes open, and you'll be playing this until the cows come home.